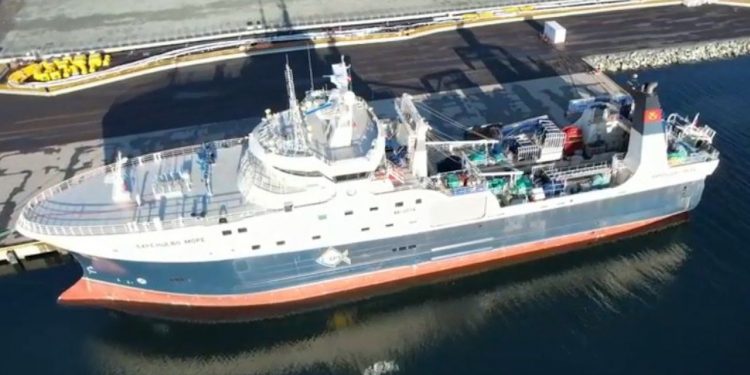 The first new factory vessel built under the Russian government’s investment quotas programme has completed its first trip and landed its catch in Murmansk.

Barents Sea was built at the Vyborg Shipyard and delivered to its owners earlier this year – and completing its first trip is a milestone for both owners and the port.

After a trip fishing in the Svalbard area, Barents Sea landed around 1000 tonnes of frozen cod and haddock products, 40 tonnes of fishmeal and three tonnes of fish oil to the Murmansk Fishing Ports storage facilities.

The 86 metre, 17 beam Barents Sea carries a crew of up to 49 and has a carrying capacity of 1370 tonnes. The factory deck has the capacity to handle up to 160 tonnes of raw materials per 24 hours, with processing lines for whole of filleted fish, fishmeal, fish oil and canned products, including cod liver.

‘The ship handles well and is stable. We identified a few technical problems during this first trip, but these can be quickly fixed.’

In a first for a Russian fishing vessel, Barents Sea discharged its catches using a lift and a hatch in the vessel’s side, with pallets already wrapped as they are delivered to the quayside. The cranes are still used, but while the pallets are brought from the fishroom in the lift, bags of fishmeal are cranes ashore through the forward hatch, making discharging a rapid process.

‘We have experience of working with such vessels, as some Norwegian transports delivering fish to Murmansk are also unloaded this way,’ said Eduard Malashenkov, head of the Murmansk fishing port transshipment complex.

So far this is the only Russian fishing vessel built to work along these lines in Northern waters, but the North-West Fishing Consortium has three more under construction at the Vyborg Shipyard.

‘We expect the second one by the end of the year. And then, with a delay of a year, the third and fourth deliveries will be completed,’ said North-West Fishing Consortium’s deputy director Igor Vygovsky.

‘These are all named for the areas where we fish, after the Norwegian Sea, White Sea and Kara Sea.’