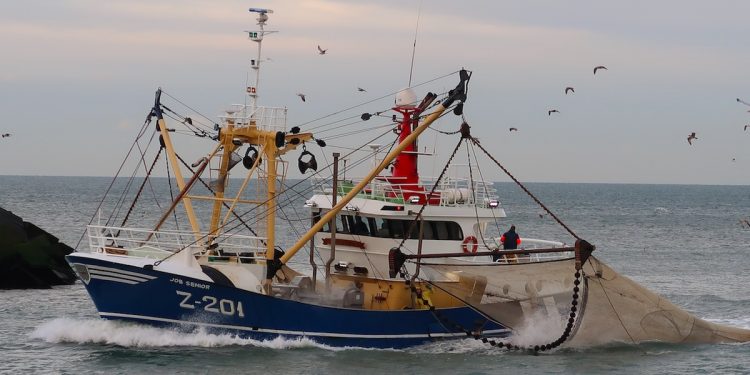 ‘We are delighted with the positive news of the increase of the plaice and sole stock due to strong year classes, and the recent investments in new building vessels,’ said Tholen skipper and EMK chairman Job Schot, reports W.M. den Heijer.

‘It shows confidence in fishing, but we still have to wait and see what the outcomes are.’

These are investments totalling millions of Euros, all of which has to be earned back, and at present it appears that stocks can cope with the fishing pressure. Over the last couple of weeks the fly-shooters operating the English Channel have been making very good trips due to increasing catches of squid and red mullet.

EMK chairman Job Schot operates the Belgian-flagged Job Senior Z-201 from of the Belgian port of Oostende, and the UK part of the English Channel is his terrain.

He said that he has noticed a significant scaling-up and modernisation of the fleet of Dutch fly-shooters and fly-shooters under other flags, but with Dutch backing.

‘If I visit those boats in the harbour my heart lifts as these are beautifully designed and built boats. They look great and there are a number of innovations on board. But I am a bit worried about the level of optimism. They can earn a living during the winter months in the English Channel but number of these boats is increasing and French fishermen have also discovered this fishing method. I really hope it will stay like it is now,’ said Job Schot, who is not targeting the same species as the fly-shooters. He sees gurnard, mullets and squid as by-catch in his beam gear.

Z-201 works the grounds on the British part of the English Channel and Job Schot said that in the last few years he sees different species in a poorer condition.

‘I see less plaice and sole but that’s not what I mean. I see that there is a lack of food and the fish are skinny, thinner than they were before. It seems that it is difficult for flatfish to search and find enough food. Regarding gurnard and mullets I cannot judge because we only see them as by-catch. But it’s clear to me that something is going on under the surface. Even biologists cannot convince me with their positive spin on this. I prefer to believe my own eyes first. We do not catch the amount of sole and plaice which we are allowed to catch and I do not believe that next year we will be able to make the most of our quota.’

The number of wind mill parks is also a serious concern for Job Schot.

‘It looks like the North Sea has been redeveloped into an industrial estate. We will lose fishing grounds and the windmills produce an enormous noise under the surface. Fish do not like that. And what about electromagnetic radiation because of the cables on the bottom? Rays and sharks are highly sensitive to this. The currents which are being caused by the bases of the windmills are a big problem too. Sand is being removed and there will be erosion around the windmill pillars. In simple terms, this is a serious threat to the ecosystem, and to all the organisms are living in and on the bottom, and a threat to the security of the fish stocks,’ Job Schot said.