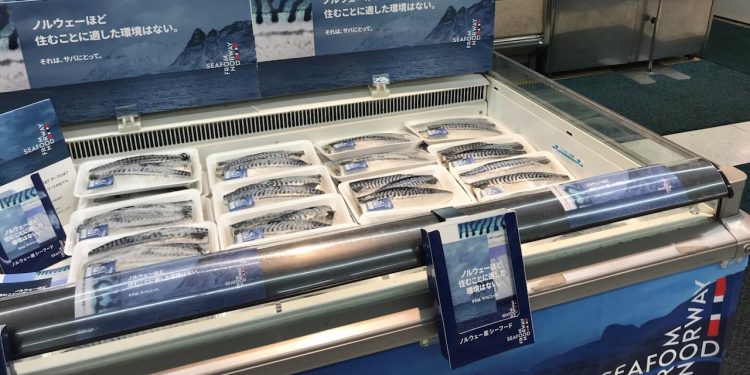 The Norwegian industry has never seen a March as strong as this year’s. In the first three months of 2021, Norway exported seafood worth NoK27.7 billion, a decrease in value of 3% compared with the same period last year. But this is still the second-best first-quarter result ever.

‘Norwegian seafood exports have had a solid start in 2021, primarily due to a substantial increase in export value in March, especially for salmon. Thanks to a record high volume, salmon exports in March are the highest recorded in a single month,’ said Norwegian Seafood Council CEO Renate Larsen.

The record-breaking March reversed a decline in export value through January and February.

‘Although the pandemic continues to affect the seafood markets, it is gratifying that Norwegian seafood’s export value has never seen a more vital March than this year. Our seafood is sought after all over the world. Behind the numbers is an adaptable industry with good people at all levels,’ said Minister of Fisheries and Seafood Odd Emil Ingebrigtsen.

‘2021 has given us the second-best result in history for seafood exports in the first quarter. Nevertheless, we must acknowledge that there are still challenging times for parts of the industry. This especially applies to cod products, such as fresh cod and clipfish,’ Renate Larsen added, pointing out that a weak Norwegian krone helped to keep the export value up in 2020. Seafood exports have not benefitted from that support this year.

‘Although Norwegian seafood has become more expensive for buyers, there have been large volumes and relatively strong demand for salmon, herring, and king crab products in the first quarter,’ she said.

‘Exports of frozen cod from Norway to the UK do not appear to be affected by Brexit. Exports of frozen cod to the United Kingdom and France increased by more than 500 tonnes in the first quarter of 2021. This corresponds to an increase of 37 and 21%, respectively,’ he said.

‘It has been a solid start for the year for herring exports, and we must go back to 2012 to find a higher export value for herring in the first quarter. With an increase in the Norwegian spring-spawning herring (NVG) quota of 24%, We expected prices to come under pressure, but this has not happened. Through the pandemic, herring has experienced increased demand in many markets, and the lack of large herring has contributed to pushing up prices,’ said Jan Eirik Johnsen, responsible for pelagic species with the Norwegian Seafood Council.

Norway exported 89,700 tonnes of mackerel worth NoK1.4 billion in the first quarter, an increase in volume of 10% and a 1% increase in value

‘Last year, mackerel set a new export record, and the trend continues in the first quarter with a new record. Like herring, mackerel has increased demand during the pandemic. In Asia, we see that demand for healthy and affordable products is a crucial explanation – in addition to good availability in grocery stores,’ he said.

Last year, there was a robust export of herring roe, with a value of NOK 429 million due to a lack of capelin roe on the markets.

‘This year, roe production was significantly lower, but the Norwegian fleet received a capelin quota in Icelandic waters for the first time in several years. The absence of capelin has created demand in several markets, which resulted in record-high prices in the first quarter,’ he reported.