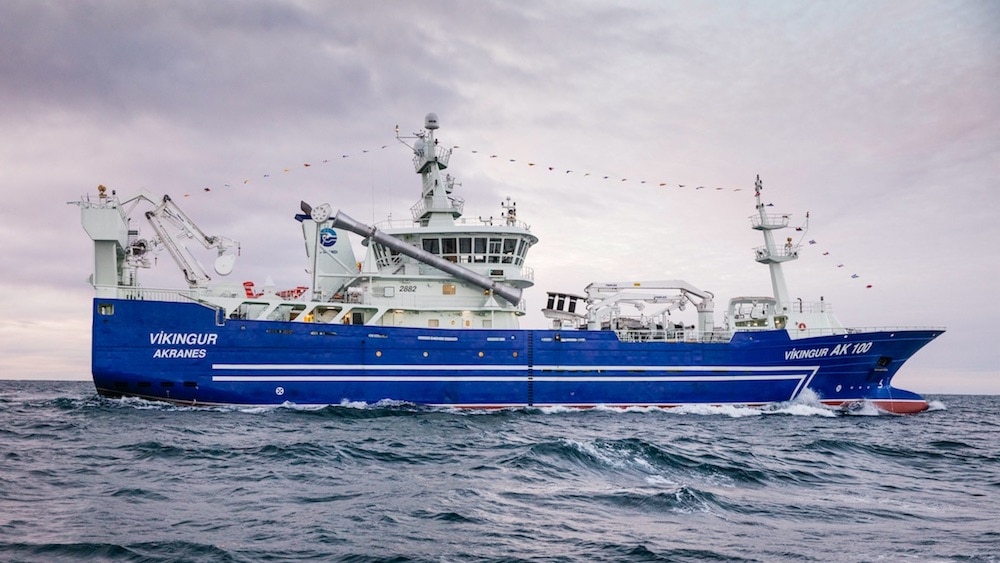 Víkingur is coming to the end of its trip and skipper Albert Sveinsson hopes to get in one more before the Seamen’s Day layover. Image: HB Grandi

As fishing for blue whiting in Faroese waters has slowed down, some pelagic vessels have landed and not gone back, while others are continuing to work on dispersed fish.
The Síldarvinnslan skippers have called it a day already, as Bjarni Ólafsson is tied up, as is Margrét which landed 2000 tonnes in Seyðisfjörður earlier this week, while Beitir is landing 3000 tonnes, followed by Börkur with 2300 tonnes. Hákon has also finished its trip, leaving only a handful of the Icelandic pelagic vessels at work.
‘The fishing has slowed down a lot from when it was at its best and this trip was a patchy one for us,’ said Börkur’s skipper Hjörvar Hjálmarsson.
‘In fact, this is all conventional. Once we’re into May and the blue whiting head north they become more dispersed and the fishing slows down. We have often been fishing blue whiting up to Seamen’s Day [the first weekend in June], but as the capelin failed to show, there was more blue whiting fished down near Rockall so the fleet has taken more of its quota than would be usual. There’s nothing unusual about taking a break now while the fishing is slowing down and as the quota becomes tighter,’ he said.
HB Grandi’s pelagic vessels plus a few more are still at work, and hope to remain fishing until the Seamen’s Day layover.
‘There had been hopes that the good fishing would continue for a while,’ said Víkingur’s skipper Albert Sveinsson, towing around 50 nautical miles south-west of the Faroe Islands, close to the end of the trip and with 2100 tonnes in the tanks.
‘We have been doing long tows, up to twenty-four hours, and have been taking hauls of around 300 tonnes. There’s less today, but we’re hopeful. The blue whiting are very dispersed, ad they’re not easy to handle until they start to group together,’ Albert Sveinsson said.
‘There was a Norwegian pelagic boat searching for blue whiting further south, but they didn’t find anything. They came up here yesterday and are fishing the northern Ræsi grounds.’
There are three Icelandic pelagic vessels fishing on the same grounds, with Venus and Aðalsteinn Jónsson fishing there, while Jón Kjartansson is on the way. In addition, there are a number of other fishing vessels, mainly from Russia and the Faroe Islands.
‘Venus has pretty much just arrived and they’re on their second tow. We could do with a good haul to finish the trip, and then we should manage one more trip before Seamen’s Day,’ Albert Sveinsson said.