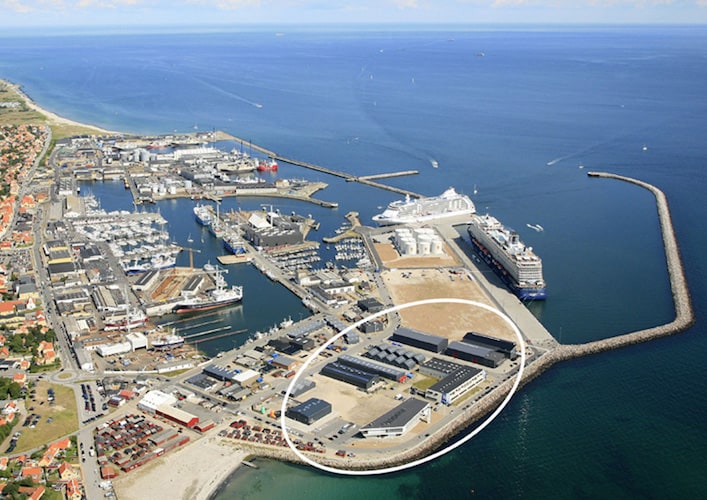 A previously undeveloped area between the Skagen Skipper School and tank installations are seeing new facilities being established primarily by fishing companies that use Skagen as their main landing port.

Shrimp fishermen Henrik Terpet and Brian Sørensen who run the Casilo S-386 are building a new 600 square metre store with an office and a warehouse for storing gear. They are also due to take delivery of a new trawler in June next year.

‘We currently have a smaller store with Brian’s brother, but we have faith in the future. We ordered a new trawler, and we will need additional space for our gear. We are very happy to be at Skagen, which has all the facilities we need,’ said Henrik Terpet.

Swedish pelagic fishing vessel Sunnanland lands around 8000 tonnes of its approximately 10000 tonne annual catch at Skagen. They have had share in a smaller building at the port for many years, but have just signed an agreement with the Port of Skagen on the lease of an area of R03;R03;the west harbour where they intend to build a 600-700 square metre store, which Mikael Axelsson of Sunnanland hopes can be completed in a year.

‘Skagen manages the process, and they working out the options for electricity and water so we can get started. The port is also building a new road into the plot. We are very pleased to have Skagen as our home port. All facilities are present here and it is an ideal place,’ Michael Axelsson said.

Skagen Trawldoors and the Irish vessel Aine have built three new adjacent units, completed in late 2015. Swedish pelagic fishing vessel Ceton built a new store and office in the spring of 2015. In 2014 the Swedish-owned Astrid Fishing opened a new headquarters on the west harbour and Skagen Supply also built a new facility a few years ago.

‘Of course we want to provide links to Skagen for our fishermen, as we have done with both foreign and Danish fishermen,’ said Willy B Hansen, managing director of the Port of Skagen, which is in the process of preparing a third stage of its of port expansion, which will provide even more opportunities for the fishing industry with 130,000 square metres of reclaimed land and 730 metres of new quayside space.

We have received approaches from Swedish fishermen who want a closer connection to Skagen if we can provide additional quay facilities, so they have a better berthing opportunities. Fishing is part of the port’s DNA, which has cross-relationships with our other marine business areas and services.

‘The expansion of the port will mean a lot to us,’ said Mikael Axelsson at Sunnanland.

‘It would be great to have even more berths, and it will perhaps attract new producers to Skagen that can accept more fish. It would be good for fishing and for us Swedes, as Skagen is our lifeline for the fishing industry.’