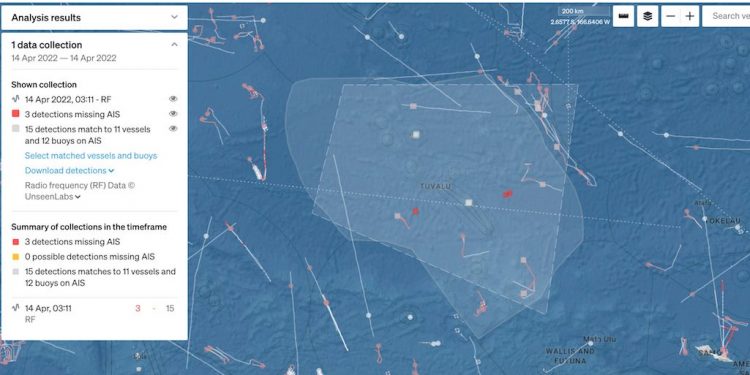 Nearly 60 satellite scans of Tuvalu’s exclusive economic zone (EEZ) have been obtained since December 2021 as part of a pilot project under the World Bank-funded Pacific Islands Regional Oceanscape Program (PROP).

This initiative, designed to chart the extent of fishing activity by non-authorised or non-reporting vessels, is a collaboration between the Tuvalu Government’s Fisheries Department and New Zealand company Starboard Maritime Intelligence.

‘What Tuvalu is doing here is important, because access fees paid by foreign vessels fishing their waters represent more than fifty-five per cent of government revenue,’ said fisheries compliance advisor Francisco Blaha, who has worked in Pacific Island fisheries for over 30 years and collaborated with Starboard in this project.

‘Anyone fishing illegally causes a direct hit to the economic viability of the country,’ he said.

Fisheries are of critical importance to the region. Illegal, unreported and unregulated (IUU) fishing for tuna in the Pacific region is estimated to amount to almost 200,000 tonnes annually. For many Pacific Island nations the licence fees from vessels fishing in their EEZ is a major part of their annual income.

Each satellite scan, covering up to 80% of Tuvalu’s 750,000 square kilometre EEZ, uses cutting-edge technology and is applied for the first time in this region. Different types of satellite sensors are used and provide independent means of detection, including mapping the locations of navigational radars aboard ships, and imaging of the ocean surface using synthetic-aperture radar.

Satellite detections and the positions of known vessels are automatically matched in the Starboard digital platform. Any vessels detected that are not also reporting their locations using the mandated identification systems are highlighted as being ‘dark’ – that is, potentially fishing illegally in the area and trying to evade identification.

‘Most of our scans in Tuvalu contained some potentially dark vessels. We found that their number varied quite a bit over time just as licensed activity is variable,’ said Tupulaga Poulasi, Principal Fisheries Officer at Tuvalu Fisheries Department.

The scale of the operation and the use of new technology has rallied others in the region. For example, the Pacific Island Fisheries Forum Agency (FFA) and New Zealand Defence Force (NZDF) provided additional intelligence including verification of scans from air and sea patrols.

‘Satellite reconnaissance is due to become a regular tool for us to learn about the patterns of dark vessel activity, which supports our intelligence analysis work on key high-risk areas and targets to direct surface and air assets,’ added FFA Surveillance Operations Officer, Yohni Fepuleai.

Supporting Pacific Island countries such as Tuvalu to harness the potential of their natural resources, especially fisheries, in a sustainable way lies at the heart of poverty reduction.

Although these new technologies and the merging of different types of data can significantly enhance fisheries monitoring, control and surveillance (MCS), there is a steep learning curve in understanding and exploiting what they offer. The project team is working on instructional resources and is planning a workshop to build local capability and to share the learnings from this project.

‘Over the past year or so more than a dozen new commercial vessel-detection satellites have come online, and before the end of 2023 we expect dozens more, which means we are quickly closing the surveillance gap.’