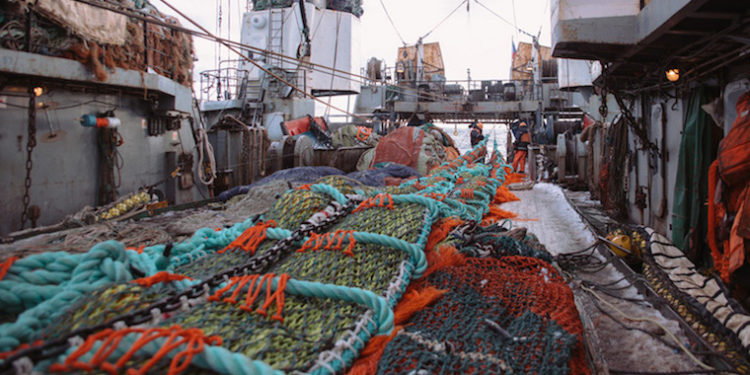 The fishery is one of the world’s largest suppliers of pollock from the North Pacific, with products supplied to more than countries across five continents. Every five years MSC certified fisheries have to go through the full assessment process again to ensure they are continuing to meet the MSC Fisheries Standard. The assessment was carried out by third-party conformity assessment body Acoura Marine.

The Pollock Catchers Association (PCA), representing thirty companies active in the pollock fishery which between them landed 715,000 tonnes of fish in 2017, first obtained MSC certification in 2013. The fishery was given eight conditions –;improvement areas to address during the five-year certificate period – and all of these were met.

Three conditions were aimed at improving the scientific basis of stock assessment and fishery management and were met successfully. Another three conditions concentrated on minimising the fishery’s impact on the Sea of Okhotsk ecosystem, including fishing operations, interaction with Endangered, Threatened and Protected (ETP) species. Two further conditions were set for the management process. Closure of these conditions has led to greater transparency and closer involvement of stakeholders, including environmental NGOs.

‘Congratulations to the Pollock Catchers Association (PCA) on their recertification. Over the past five years, the PCA, scientists, management and NGO actors in Russia have worked hard to address the conditions placed on the fishery, resulting in real improvements. The progress achieved was recognised in the re-assessment, where the PCA received higher scores than previously for many assessment indicators,’ said Camiel Derichs, Director MSC Europe.

‘As the only global wild capture fisheries standard meeting the ISEAL codes of good practice, the MSC reviews its standards every five years in the light of progressing science and management best practice. As a result of the last Fisheries Standard Review (FSR), the MSC has adopted a new standard (version 2.0). Over the course of their new certification time frame, we hope the PCA will continue to make improvements to ensure a smooth transition to this new version of the MSC Standard.’

‘With the support of fishery research institutes, we were able to obtain much deeper understanding of the impacts the fishery may have on the ecosystem.,’ he said.

‘PCA also funded research on modelling of the trophic network of the Sea of Okhotsk ecosystem, and an at-sea survey of sea birds and mammals interaction with gear. The PCA supported the initiative of the Observer Working Group to increase a number of scientific observers from fishery research institutes. As a result, monitoring scope and coverage doubled since 2014, and the amount of biological data collected from the fishery is four times higher than before. In the 2018 season, 20% of the PCA vessels carried scientific observers. All the above resulted in a smooth re-certification process, and the good scores the fishery has been awarded,’ German Zverev said.

WWF Russia’s Sustainable Marine fishery Programme director Andrey Vinnikov commented that WWF Russia started co-operation with the Pollock Catchers Association before the first certification was issued – and WWF was one of the organisations that raised objections to this fishery.

‘At present, we are satisfied with the progress observed during the five-year period since the first certificate was issued. The Association has already taken into account a number of comments made by WWF during annual audits. To study and minimise the bycatch of seabirds and marine mammals, PCA management together with scientists from the TINRO-centre conducted work at sea. Significant work has been done on observer involvement on PCA vessels. The number of observers from fisheries research institutes increased to 23 specialists in 2018. In addition, over the past two years PCA’s website became more informative. This is also the result of the WWF comments raised with PCA,’ Andrey Vinniko said.