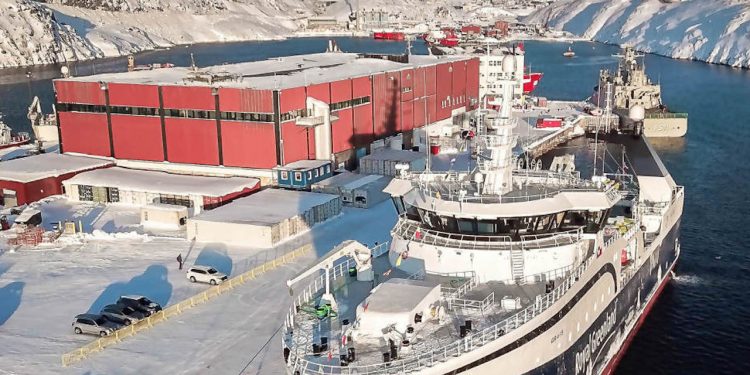 2020 was a particularly difficult year for Royal Greenland, but the company sees reasons for some optimism for this year.

In spite of considerable efforts, Royal Greenland has not been able to fully mitigate the economic effects of the market turmoil and consequent lower sales prices due to the Covid-19 pandemic.

During 2020, Royal Greenland experienced a revenue drop of 9%, is caused by falling prices for the company’s core products. During 2020, prices for shell-on shrimp, cooked and peeled shrimp and Greenland halibut dropped by between 15% and 20%.

All the same, Royal Greenland is looking to the future with confidence, focused on regaining its strength following the pandemic, with a cautious prediction for a DKK100 million profit for this year,.

Although it was foreseen that the pandemic would have a strong negative impact on Royal Greenland’s earnings, the company decided to continue fishing, purchasing and producing in much the same way as originally planned, in order to live up to its widespread social responsibility as an important and often the only company in the individual fishing communities.

‘Royal Greenland has acted as a buffer between reduced world markets and a normal supply chain,’ a spokesperson for the company pointed out.

In 2020 Royal Greenland employed the equivalent of 1452 full-time staff in Greenland, 20 more than in 2019. The company purchased 62,000 tonnes of raw material from coastal fishermen in Greenland and at an average price of just under 7% lower than in the record year 2019.

‘The communities in which fishermen and our staff live have thus been cushioned from the worst consequences of the Covid-19 pandemic,’ the company states.

‘In Royal Greenland’s view, a more restrictive approach would have caused lasting damage to access to resources and led to socio-economic problems for local communities in both Greenland and Canada. For Royal Greenland, CSR and social sustainability are not just words, but a concrete commitment to take great social responsibility, even when this comes at a high economic price.’

The pandemic resulted to two waves of closures of communities in Europe and Japan, at the same time as access to the Chinese market was restricted, which made 2020 an unusually difficult sales year for Royal Greenland.

‘For many years, the Group has deliberately focused its sales towards food service in Europe and towards Asia in general and China in particular. The intention of both initiatives has been to reach customers who value and therefore pay for high quality products that are only available in limited quantities. It is still a good strategy – but there is no doubt that in 2020 it has meant that Royal Greenland has been hit particularly hard by the pandemic,’ the company’s spokesperson commented.

Despite the pandemic, 2020 also featured a number of expansion initiatives and investments. In sales terms, e-commerce was strengthened, especially in China and Japan. Joint ventures were launched in Chile and Canada, which are expected to open up new products and market opportunities.

Royal Greenland has also chosen to stick with its the planned trawler investments. The shrimp trawler Nataarnaq is expected to be delivered at the end of 2021, and most recently a new trawler to replace Tuugalik has been ordered for delivery in 2022.

In the autumn of 2020, the pelagic vessel Tasiilaq was replaced by a larger vessel with greater fishing and freezing capacity. This has provided significantly better conditions for developing the pelagic fishery in Greenlandic waters and has already had a positive effect in 2021.