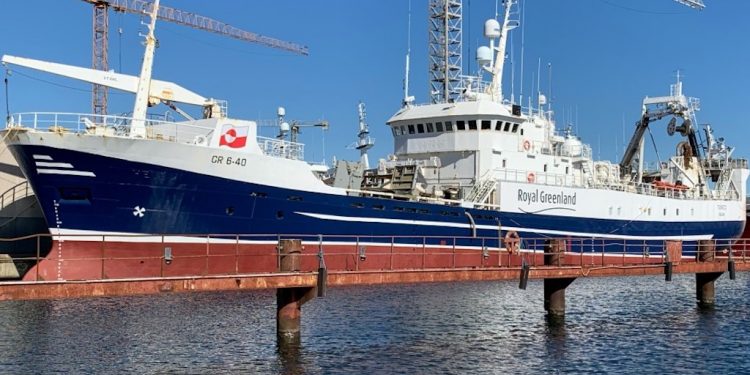 A 70-metre former pelagic vessel has been refitted to carry live cod as part of Royal Greenland’s Nutaaq programme of collecting live fish held in cages from coastal fishermen and bringing it to Maniitsoq for processing.

With a 200-tonne carrying capacity, Tuneq far outstrips the 80-tonne tank space of the vessel used for this purpose up to now. Tuneq is the former Icelandic pelagic vessel Thorsteinn, built in 1988 as Helga II, and acquired in 2014 by Royal Greenland.

It has been through a refit in Skagen to adapt it to its new role as a live fish carrier.

‘This will have a big impact on the logistics around this project,’ said Sten Sørensen, operations manager responsible for cod production at Royal Greenland.

‘It takes about three days to sail back and forth to Qeqertarsuatsiaat and Maniitsoq. It will be a great advantage that we do not have to steam back and forth as many times, because Tuneq can carry such large quantities.’

He commented that the Nutaaq project has grown since the first cod were landed at the factory in 2015. At that time, only a few fishermen in the region around the factory were involved, but now there are around a hundred independent fishermen participating, catching cod to be held in cages along the coast from Kangaatsiaq in the north and all the way down to Paamiut in the south.

‘It will make production more stable because larger quantities can come to the factory. This will provide better conditions for everyone,’ said Sten Sørensen, commenting that a substantial investment has gone into this aspect of the project, which highlights Royal Greenland’s commitment to the Nutaaq project.

‘The refit has taken time and constitutes a significant investment, but it is necessary to continue to develop Nutaaq and the summer fishery for cod, which is so important for our fishermen and society.’