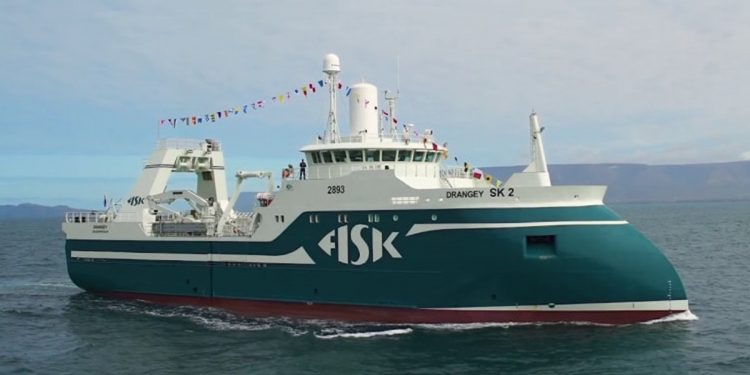 Trawl doors made by Faroese company Rock have been successful in Iceland since the first pair of Super Shark doors were sent there for testing in 2006, and Rock continues to develop its relationship with the Icelandic fleet.

According to Rock’s Hans í Liðini, a first pair of the company’s Sea Hunter doors have been trialled in Iceland and FISK Seafood’s Drangey SK-2 has had an 8.25 square metre, 3400kg pair on board for a couple of trips, and did well with them.

He commented that the Sea Hunter doors can be towed on the bottom off off it – as Drangey has been working its doors.

‘What is special is that you can tow these doors on the seabed or above it, without losing any spread, and without needing to change the rigging,’ he said, adding that a 4 square metre pair is also being tried out in Iceland by a smaller trawler, Steinunn, with good results.

‘These aren’t completely new doors, but they are new to Iceland,’ he said.

The first Sea Hunter doors went to Greenlandic shrimp trawler Markus, and when that trawler was replaced by the new Markus, the skipper and owners ordered two new sets of Sea Hunters. Subsequently other new trawlers in Greenland have followed suit, with Regina C and Svend C each collecting two sets of Sea Hunters after leaving the shipyard.

‘Five out of six of the new trawlers for Greenland have these trawl doors,’ he said.

‘All of the Faroese trawlers fishing in the Barents Sea are using Sea Hunter doors, and the smaller trawlers working inside the Faroese 12-mile zone use 3.50 square metre sets of these doors.’

Rock’s relationship with Iceland goes back a long way, to when a set of Super Shark doors were tried out by several trawlers back in 2006 – and one of those trawlers bought the test pair.‘After that we sold 25 sets of Super Sharks to Icelandic trawlers. Then came the growing interest in semi-pelagic doors and that’s when we developed the Sea Hunter design,’ Hans í Liðini said.

Now Rock has a more formal relationship with the Icelandic market, with fishing gear supplier Ísfell now handling its doors as Rock’s Icelandic agent, while Rock has the agency to sell Ísfell’s trawl gear in the Faroe Islands.