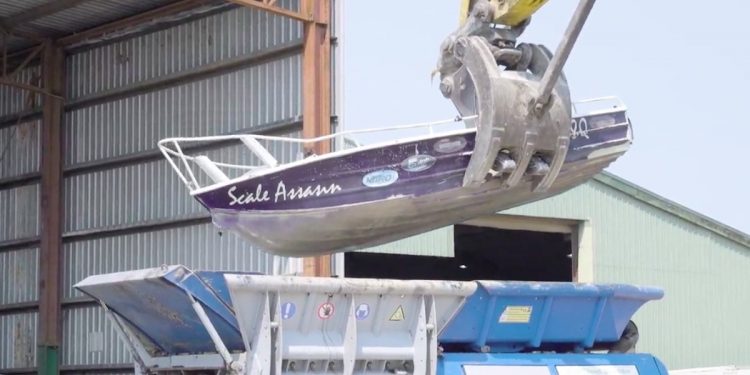 The fishing boat at the centre of Queensland’s biggest black market fisheries bust has been reduced to recycling material after being seized and crushed by the State Government. Although the boat was only 4.30 metres long, it was used to catch more than 14 tonnes of redclaw.

Queensland’s Minister for Agricultural Industry Development and Fisheries Mark Furner said the aluminium boat was crushed to show what can happen if they flout Queensland’s fisheries laws.

‘Today’s boat crushing sends a clear message that black market fishing activities will not be tolerated in Queensland,’ he said.

‘Anyone found guilty of black marketing or trafficking in fish is now looking at fines of up to $400,000 and up to three years jail after changes to the Fisheries Act earlier this year. Our message is clear. There is no excuse for black marketing fish and we won’t stand for it.’

In Queensland’s largest black market fisheries prosecution, the operators of a Mackay business and a contractor were fined a total of $115,000 and their boat, outboard motor and trailer were forfeited to the State for multiple breaches of their permit to collect redclaw.

‘Surveillance at Fairbairn Dam, Emerald and Mackay was conducted following complaints alleging commercial take of wild redclaw from the dam. QBFP officers uncovered extensive black market activity over a 16-month period from July 2016 involving a syndicate of people linked to a licensed redclaw aquaculture facility operating in Mackay. A permit to collect up to 200 redclaw for broodstock purposes was fraudulently used to take more than 14,000kg of redclaw from Fairbairn Dam and later sold,’ he said.

‘Redclaw can only be sold as a result of aquaculture operations and the take and sale of wild caught redclaw is prohibited. The surveillance operation resulted in three people being charged with a total of 54 offences including the use of excess, unmarked and sunken freshwater traps, the unlawful sale of redclaw, and the falsification of logbooks.’

According to to Mark Furner, changes to the Fisheries Act, passed by Parliament earlier this year, were aimed at safeguarding fisheries for generations to come by introducing stronger powers for compliance officers and heavier penalties for serious offences like black marketing.

‘QBFP uses a range of techniques and technology to uncover illegal activities, including surveillance cameras. We also recently deployed drones as part of our compliance enforcement effort, making it even harder for people to hide illegal activities. Our state’s fisheries resources belong to all Queenslanders and it is our job to protect fish for the future,’ he said.