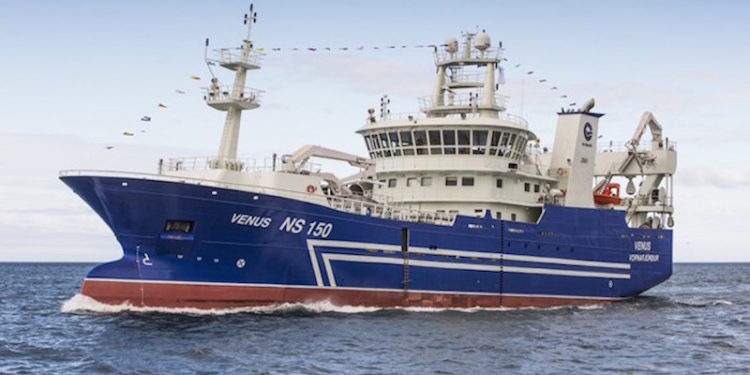 While HB Grandi’s pelagic vessels have already made an early start on this year’s mackerel season after fishing well on blue whiting in the spring and early summer, the Síldarvinnslan vessels are still on blue whiting.

Börkur has just landed 2300 tonnes of blue whiting to the fishmeal factory in Seyðisfjörður, and factory manager Gunnar Sverrisson said that the fish are fine quality and ideal for production.

Skipper Hjörvar Hjálmarsson was ready to sail again as soon as discharging was complete.

‘We landed around 2300 tonnes of good quality blue whiting that was caught at the eastern side of the Faroese zone. Fishing was very good and the catch was taken in seven tows. The weather on the fishing grounds was as good as it gets, with hardly a breath of wind,’ he said.

Meanwhile HB Grandi’s pelagic vessel Venus is on the Papagrunn grounds and Víkingur has just finished landing 600 tonnes of mackerel in Vopnafjörður.

‘This is our second mackerel trip and in the first one we were a lot further east, close to the Westmann Islands. That trip was around 600 tonnes, with a mix of some herring, but this time we’ve started with a 170 tonne haul on the Papagrunn grounds and it’s clean mackerel,’ said skipper Róbert Axelsson.

‘It looks like there aren’t many fishing mackerel yet. Huginn was next to us off the Westmann Islands in the last trip and they are still fishing further west. We haven’t been aware of anyone else yet,’ Róbert Axelsson said.

He commented that although the blue whiting fishing went well, there is still a decent amount of quota still to be caught, but he does not anticipate any problems catching it.

‘We’ll see what the situation is in the autumn or before Christmas, and the main concern is whether we catch blue whiting all the way out east in the Faroese zone or if we’ll be able to catch any of it here in Icelandic waters. This year we fetched our blue whiting east of the Faroes, apart from what we caught in Icelandic waters before the Seamen’s Day stopover. We’re hoping that will continue, as it saves us a lot of steaming time,’ he said.