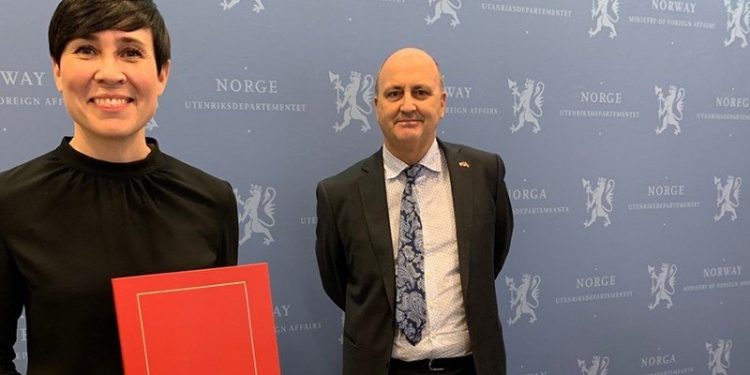 ‘The MoU on establishing an ocean dialogue is not only a sign of our close bilateral cooperation with Chile on the oceans, but also shows our shared international commitment to developing a sustainable ocean economy,’ said Norway’s Minister of Foreign Affairs Ine Eriksen Søreide.

Chile is the third country with which Norway has established a formal ocean dialogue.

The MoU with Chile was signed in a video meeting between Ine Eriksen Søreide and Chilean Minister of Foreign Affairs Andrés Allamand.

‘Chile and Norway are countries with a deep ocean vocation, where the sea is an essential part of their culture and economy,’ said Minister Allamand.

‘Chile is the tenth-largest fishing nation and exclusive economic zone in the world by size, the fifth largest exporter of seafood, the second-largest producer of salmon aquaculture; and 95% of our foreign trade is shipped by sea.’

He also stressed that in recent years the international governance of the oceans has occupied a relevant place on the bilateral agenda, where the participation of President Sebastián Piñera in the High-Level Panel for a Sustainable Oceanic Economy stands out.

Norway has previously initiated formalised ocean dialogues with Australia and India. Norway and Chile are already engaged in wide-ranging co-operation and share many common ocean-based interests, in particular with regard to ocean industries, sustainable management of ocean areas in the Antarctic, and efforts to promote sustainable oceans through multilateral processes. The aim of the ocean dialogue is to increase the profile of, and further develop, the oceans as an important component of the cooperation between Norway and Chile.

Following up the conclusions of the Ocean Panel will comprise a vital part of the formal ocean dialogue. The Ocean Panel was established at the initiative of Prime Minister Erna Solberg, who is also its co-chair. Norway, together with Chile and the twelve other member countries, is working to promote greater international understanding of how the economic significance of the oceans is linked to environmental status.

The Panel’s member countries have made a commitment to sustainably manage 100% of the ocean areas under their national jurisdiction by 2025. This means that in five years’ time, close to 40% of the world’s coastlines and 30% of all exclusive economic zones will be covered by integrated management plans.