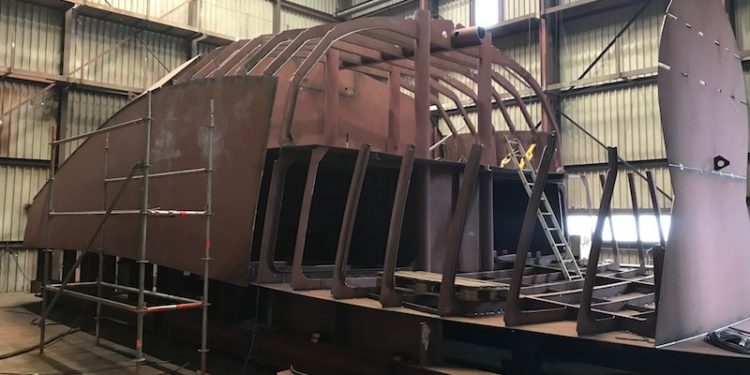 UK fishing company Waterdance has placed orders with the Luyt yard at Den Oever in Holland for two new fishing vessels. A new crabber is already under construction and the keel of a new 30m beam trawler to join the UK fleet will be laid this summer.

The hull of Waterdance’s new crabber, Nichola of Ladram, is under construction at the Ibis yard in the north of Holland and will be brought to Luyt in Den Oever for completion, with a handover date of February 2019.

The 14.99 metre overall, 7 metre beam Nichola of Ladram is an Ian Paton design and is being built to accommodate a 45 tonne vivier tank with a heavy-duty set of pumps capable of six water changes per hour, and able to hold 22.5 tonnes of crab.

‘It’s part of our strategy to diversify into other sectors, including into crabbing, and the order for Nichola of Ladram follows the acquisition last year of the Pen Glas, a 1960-built crabber that is currently being refitted in Brixham,’ he said, adding that the possibility of a sister vessel is being considered.

‘We have had a long and very successful relationship with the Luyt yard, and they recently took the Lloyd Tyler for an extensive refit with a new main engine, new gensets, new fish handling equipment and a new bulbous bow – and it returned to Brixham as the Sam of Ladram.’

Nichola of Ladram is due to be delivered early next year, and is a precursor to the Georgina of Ladram, the first new beam trawler to be ordered for a UK company for the best part of twenty years.

The hull of the 30 metre Georgina of Ladram will also be built at the Ibis yard, with the keel due to be laid in July, and fitting out and delivery of the finished trawler will be done by Luyt.