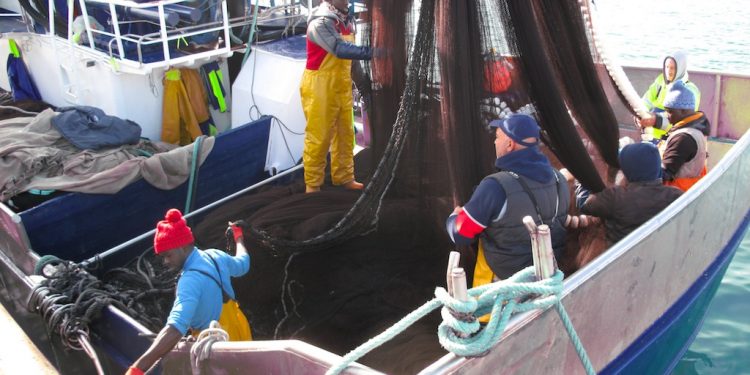 Unions representing more than 129,000 fishers are gathering in Amsterdam this week to set their agenda for advancing fishers’ rights, safety and working conditions.

The International Transport Workers’ Federation’s (ITF) Fisheries Section Conference brings together 89 fishers’ unions from 59 countries, alongside activists from fishers’ rights networks and academic leaders, to mark progress and shape the next five years of action.

‘Fisheries remains a sector where the fundamental labour rights of workers are routinely trampled on, particularly of those in and from the global south,’ said Johnny Hansen, ITF Fisheries Section Chair.

At least 24,000 fishers are believed to killed each year at work with many more seriously injured according to estimates from the UN Human Rights Council Special Rapporteur on the Right to Food.

In the UK, despite making up 55% of the industry workforce, migrant fishers work longer hours for less pay than locals and are fearful of speaking out even as 35% report being subjected to violence at work. This treatment of migrant fishers, where they do not have the same rights as local workers, is commonplace globally.

‘With ever-expanding fishing fleets particularly in China, irresponsible fishing practices and mounting pressure to cut costs across supply chains – we have seen the exploitation of fishers spread to every corner of the globe, said Johnny Hansen, who joined the industry as a crewman in 1982, and commented that across the world governments have allowed businesses to compete unchecked, with little protection in place for workers across their supply chains.

‘Governments disregard labour safeguards to encourage and increase competition. Instead of protecting the fundamental labour rights of fishers, they have let corporations pursue methods to get products to market more cheaply at the expense of workers, further eroding fishers’ already exploitatively low labour standards,’ he said.

‘This is why our agenda has shifted. It is only possible through building workers’ power across supply chains and ensuring that all actors including governments, seafood companies and retailers are held accountable for the labour standards from the top to the bottom of fisheries supply chains.’

The conference comes at a time where supply chain accountability is increasingly important to a new generation of ethical consumers, and when many governments are strengthening laws and legalisation on accountability, transparency and human rights due diligence.

Delegates at the conference in Amsterdam are hearing how the ITF and affiliated unions are doing critical work around the world to win regulation that secures fishers’ rights. Working alongside fishers in Southeast Asia, West Africa, the United Kingdom, and Ireland, the ITF and its partners have supported the formation of fishers’ rights networks as the foundations for workers to build their own independent trade unions.

‘There are so many who try to cheat fishers – the crewing agents, the owners. We are taking action for equality for every fisher who calls Ireland home,’ said Noel Addablah, a migrant fisher from Ghana who is attending the conference and who came to Ireland on the promise of decent work and good wages, to find an industry riddled with abuse, racism, and exploitative working conditions.

The conference is celebrating recent important milestones in the global fight for decent work. In Ireland, almost a decade of campaigning by the ITF for fishers’ rights has seen the government commit to abolishing its deeply fraught Atypical Working Scheme used to recruit migrant fishers to the country. Irish legislation will move from tying fishers’ residency status to their ongoing employment with a vessel owner and replace it with visa routes that provide migrant workers with the legal safeguards enjoyed by Irish nationals and a pathway to citizenship.

In Thailand, the ITF has assisted thousands of Burmese and Cambodian migrant fishers to establish and build the Fishers Rights Network (FRN). The FRN has mobilised fishers to stand up and protect their rights by bargaining seafood supply chain agreements, and health and safety agreements with suppliers and vessel owners. The ITF’s efforts to build a democratic trade union for fishers in Thailand, alongside pressure from partners in the region, forced Thailand to become the first country in Asia to ratify the C188 in January 2019.

The ITF is calling on the key fisheries nations of Indonesia and the Philippines, as well as Cote d’Ivoire and Ghana, to urgently ratify ILO Convention C188, the international law that protects fishers’ rights and decent working conditions. In addition to laying out minimum working conditions, the convention makes clear fishers’ fundamental civil and labour rights – including the right to form and join trade unions. Without its ratification and implementation governments can continue to turn a blind eye to the ongoing exploitation of fishers either working at home or abroad.

Among the 20 governments that had ratified C188 already, the ITF will be pushing for them to fulfil their obligations to effective implement and enforce laws to protect workers in their fishing industry.

ITF Fisheries affiliates will continue to campaign for the unconditional support of fishers’ fundamental trade union rights, including the right to freely associate and collectively bargain the terms and conditions of employment—regardless of nationality or residency status. This will include putting pressure on countries, like Thailand, to ratify ILO Conventions 87 and 98 that cover workers’ rights to freedom of association and collective bargaining.