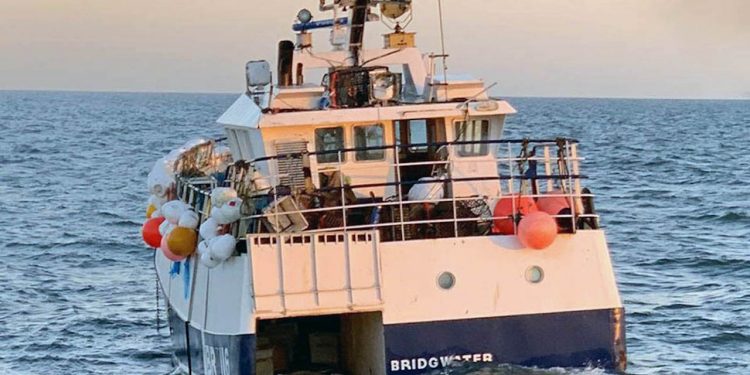 The Marine Accident Investigation Branch has released initial findings concerning the explosion that severely damaged crabber Galwad-Y-Mor BRD-116 last week while fishing north-east of Cromer, determining that the explosion was external and could be the result of munitions on the seabed being disturbed.

According to statements, the crew informed the skipper while hauling that there was a great deal of tension on the back rope while hauling, followed by an explosion that lifted the boat out of the water. All electrical and engine power was lost immediately.

With the wheelhouse wrecked and himself injured, the skipper was aware that the other crew were injured and the engine room was flooding. He instructed the crew to abandon ship and raised the alarm by contacting another vessel and activating Galwad-Y-Mor’s EPIRB.

The crew were picked up from liferafts by offshore support vessel Esvagt Njord, after which three of the crew were airlifted to hospital and the others taken ashore by the RNLI lifeboat from Cromer, while Galwad-Y-Mor was towed to Grimsby by tug GPS Avenger, where it was subsequently lifted out of the water.

Of the seven crew, two are UK nationals and five from Latvia. According to the MAIB statement, all of the crew suffered injuries – some of them life-changing.

Examining Galwad-Y-Mor in Grimsby, inspectors determined that there was no evidence of an internal explosion, but the external explosion had resulted in extensive shell plating indentation between frames, shell plating ruptures and shearing of a seawater suction, the main engine becoming displaced from bedplate, significant levels of destruction of the wheelhouse and other internal compartments, buckling of internal bulkheads and warping of decks and widespread damage to upper deck fittings.

The MAIB state that there was nothing that the crew could have done to prevent the accident and the source of the explosion has not been determined – although the possibility is that old munitions on the seabed could have been disturbed as the gear was hauled. Although extensively damaged and flooded, it is almost certain that Galwad-Y-Mor stayed afloat because the bulkheads either side of the engine room maintained their watertight integrity, containing the flood.