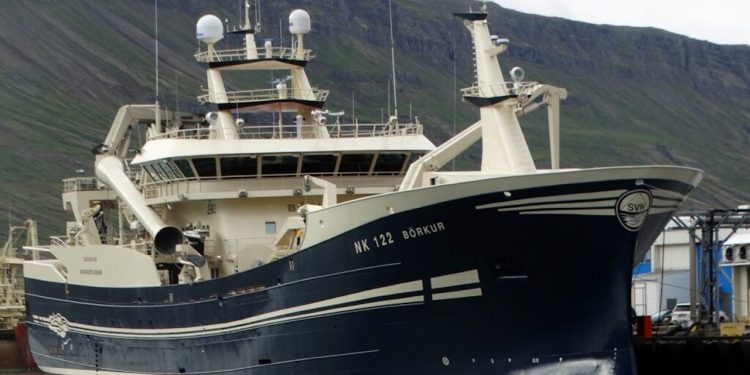 Mackerel season coming to an end – herring next

Síldarvinnslan’s pealgic vessel Börkur docked in Neskaupstaður earlier this week with what could be practically the last of the mackerel season and the first of the herring season in its tanks.

According to skipper Hjörvar Hjálmarsson, the 600 tonnes of mackerel on board was caught by three vessels, with catches from Bjarni Ólafsson and Beitir also pumped into Börkur’s tanks, and the 385 tonnes of herring were caught in a single four-hour tow on the way home.

He commented that the outlook is that the mackerel fishery is slowing down.

‘But there could still be a few good days’ fishing to come,’ he said.

‘The mackerel we’ve landed is ours, plus fish from Bjarni Ólafsson and Beitir. This was all caught more or less in one day and the mackerel looks like it’s coming to an end now. Once the mackerel season is over we can start looking at Atlanto-Scandian herring.’

He commented that they took one herring haul south of the Digranesflak, and Jóna Eðvalds also had a herring tow there.

‘We didn’t check the area out, so we can’t say how much herring there is there,’ Hjörvar Hjálmarsson said.

This was followed by a 1120 tonne landing of herring by Vilhelm Thorsteinsson later in the week
‘We had this herring in the Héráðsflói area in three four-and-a-half hour tows,’ said skipper Birkir Hreinsson.

‘It’s perfect herring, mostly Atlanto-Scandian mixed with a little Icelandic summer-spawning herring. It’s always good to fish for herring when they are plentiful. It’s also convenient that we don’t have to go as far for this as we do for mackerel. But the mackerel season has turned out well, considering how it looked at the beginning,’ he said.