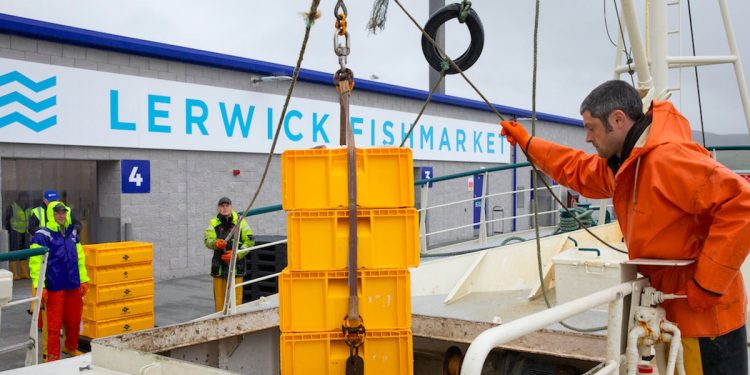 The first landings have been made at Lerwick’s new fish market, with John Wishart’s Sedulous landing a trip today.

The £7.6 million investment in the market has been backed by the European Maritime and Fisheries Fund, Highlands and Islands Enterprise and finance from Bank of Scotland. The first box of fish was landed from local vessel, Sedulous LK-308 skippered by John Wishart.

To mark the first landings, the Port Authority made donations to the local Fishermen’s Mission and RNLI.

The new market’s four temperature-controlled/chilled bays extend to 1600 square metres, compared to 726 square metres in the old market. The chilling system is more environmentally-friendly and energy-efficient. There is increased space for palletising fish and a 400 square metre chilled dispatch area.

‘The market is an excellent example of our long-term planning to meet the needs of port users,’ said Lerwick Port Authority Chairman Ronnie Gair.

‘It’s the final phase in a series of major projects, the catalyst for which was an extensive dredging programme more than a decade ago and which have transformed the harbour and operations. The market is the latest demonstration of our commitment to the sustainability of the sector.’

The location on Mair’s Quay means improved access both by sea, including better suiting landings at all states of tide, quayside water depth and approaches having been deepened to 6.2 metres, and by land for uplifting fish. The site is adjacent to the L-shaped Mair’s Pier which provides more working area and shelters landing berths.

Investment by Shetland Seafood Auctions in a new web-based electronic auction system will provide a more versatile online system for buyers, with a ‘live view’ auction hall included, when installed later in the month.

Modern welfare facilities for all market users are also included in the development.

Construction has been carried out by local company, Tulloch Developments, with design undertaken by Arch Henderson who has also managed the build.

‘The interlocking dredging, building Mair’s Quay, Mair’s Pier and market, along with associated improvements, have created a modern hub for the industry in the harbour’s Holmsgarth area at a cost of more than £30 million, increasing co-ordination and co-operation of its activities and reinforcing our position as a leading UK port for the sector. Our appreciation goes to stakeholders for their design input, finance sources, and to staff and contractors who had to contend with temporary suspension of construction due to Covid-19 restrictions.’

Work continues to complete the market – as part of the overall contract, first floor offices are being finalised for sector stakeholders, LHD Limited and Shetland Fish Producers Organisation who are funding and will own them.