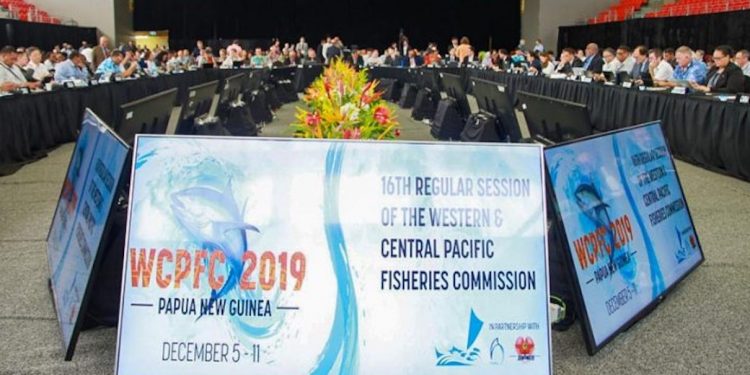 A landmark Pacific Islands Forum Fisheries Agency (FFA) resolution on climate change has been adopted by the 16th annual meeting of the Western and Central Pacific Fisheries Commission (WCPFC), creating a platform for a more urgent response to global warming by the world’s largest tuna fisheries organisation.

The resolution means the WCPFC will now more closely consider the impact of climate change on migratory fish stocks, food security and livelihoods in the Commission’s Convention Area, as well as the implications for fishing activities.

The effects on small island developing states (SIDS) will be a particular focus, with climate change seen as the single greatest threat to the livelihoods, security and wellbeing of the peoples of the Pacific.

The resolution was passed during the final hours of WCPFC16. It also means the WCPFC will take account of climate change when developing conservation and management measures and support more investigation of the issue by Commission scientists.

Additionally, the adopted resolution requires the WCPFC to consider how it can reduce the environmental impacts of its operations.

‘From the perspective of FFA members, the adoption of this resolution is a key development,’ said FFA Director-General Dr Manu Tupou-Roosen, commenting that FFA members were extremely pleased to see the resolution adopted, given the particular vulnerability of Pacific island countries to climate change.

‘It establishes a solid foundation for a more urgent approach to the threat of climate change, and not a moment too soon. While the resolution is non-binding, it will underpin momentum on this critical issue,’ she said.

‘As responsible fisheries managers, we have a part to play in addressing climate change, and the WCPFC’s willingness to endorse this resolution will send a powerful message globally that it is stepping up to the challenge,’ said FFC Chair Eugene Pangelinan.

He added that the focus in the resolution on assessing the impact of climate change on SIDS was particularly pleasing.

‘We came into WCPFC16 lobbying for Commission members to consult more comprehensively with SIDS. The special reference in the adopted resolution to SIDS shows that our concerns are being heard. There’s a long way to go, but this resolution is a good starting point.’