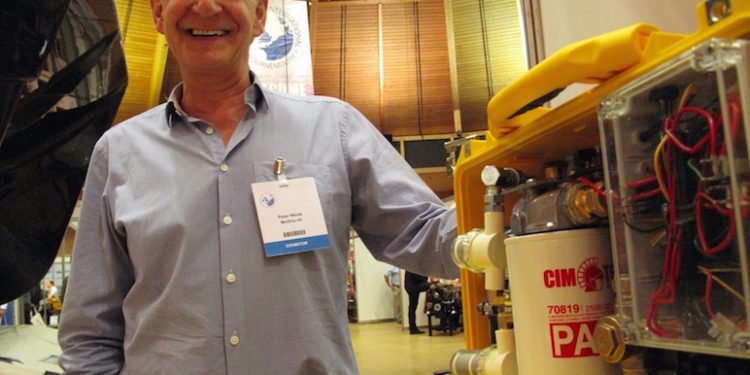 Diesel doctor Peter Weide of UK company Marship has developed a new version of the company’s portable Diesel Duck, a system capable of cleaning fuel in a boat’s tanks. Designed with the needs of fuel suppliers, marinas and co-operatives of boat owners in mind, the Diesel Duck can clean and polish the contents of your tanks in a few hours.

Crucially for small vessel operators, polishing fuel in this way is what eliminates the conditions that diesel bug needs to survive, not least now that modern fuels provide a happier home for them.

The Diesel Duck lives in a robust carrying case and can be taken to wherever it is needed. With fuel pumped in one side and back out the other, the filtered out impurities are delivered to a a jerry can for disposal elsewhere. The Diesel Duck has already been through several phases of development, and is now ready to be launched as a commercial product, although former merchant navy engineer Peter Weide does not expect it to be sold in large numbers to individual users. Instead, he plans to offer them on a contract basis to marinas, fuel suppliers and engineering companies who deal with marine diesels regularly.

He explained that the latest version is a two-speed system, designed to remove water from fuel gradually to begin with.

‘If you try to remove the water too fast, it emulsifies very quickly,’ he said. ‘So the process is to pump the free water out slowly at a rate of two litres per minute. When that has been pumped clear, then you can switch the Diesel Duck to its faster mode to polish the fuel,’ he said.

This fast mode cleans fuel at 12 litres per minute, taking out the smaller impurities into a ten or two micron filter. A further option is to fit an additional external 70 micron filter which takes out all the heavier particles before they reach the Diesel Duck itself, which has the benefit of extending the working life of the system’s internal filter.

‘This is what prevents diesel bug from occurring in fuel. They live and multiply in the water, so removing the water from the fuel gives them nowhere to hide,’ he said, explaining that these bacteria live for approximately 24 hours, and they can double their numbers every twenty minutes, and the dead bacteria form the sludge that builds up at the bottom of the tank while the live layer can be 10mm thick at the top.

‘The problem is worse now as we have taken the sulphur out of diesel and we are using more biodiesel – which gives them something to feed on.’

‘We’re planning to offer these systems on a contract basis with a deposit, and to charge a set amount for use. The system has a chip that records how many hours of use each set has. So we expect to charge a set rate for that and the user can set his own scale of charges. We want these to be used, so we would want to see each set getting 40 hours of use each month, and on a large boat it could take five to six hours to run the fuel on board through it.’

The Diesel Duck is self-contained, built with its own batteries that have a two-hour life, which Peter Weide said is enough to clean and polish around 1.50t of diesel. For larger jobs, the Diesel Duck can be plugged into an onboard 12v or 24v power source to run for longer periods.

‘As we expect these to be used on a contract basis, we’ll take them back every three months and return them reconditioned and updated to the user. In fact, there’s a small amount of space left in the corner of the Diesel Duck case, so we’re planning to fit an additive pump there for the next version,’ he said.