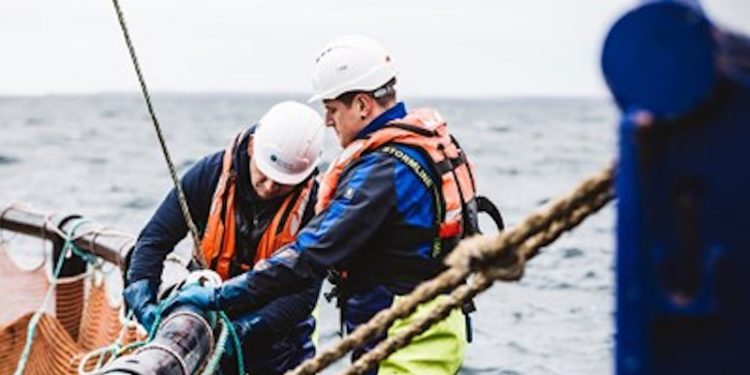 At the same time, the company has retained its Investors in Young People Good Practice Award at Gold level and has been accredited with the IIP Health and Wellbeing Good Practice Award, making Scottish Sea Farms only the seventh company in Scotland and the first salmon farmer in the UK to achieve all three accolades.

Combined, the investment has resulted in 3755 training days in the last 12 months, staff retention reaching an all-time high of over 92%, absenteeism falling to an all-time low at 1.5%, and awards including Aquaculture Learner of the Year, Finfish Farm Manager of the Year and Rising Star in the first half of 2018 alone.

‘Your principles, which are your values, run very deep and I was struck by how everyone I interviewed talked about the principles being so important to them, how they live by these values and that they are at the heart of everything they do in their daily work,’ the IIP Assessor concluded in the IIP Full Review.

A key driver behind the company’s investment has been to help the remote communities in which it farms retain their younger generations and encourage those that have left to study or work to return home.

To this end, Scottish Sea Farms has ncreased its investment in Modern Apprenticeships, with 46 apprentices currently undertaking these skills-based qualifications – the highest level for any Scottish salmon farmer.

It has also helped shape a new degree-level of Modern Apprenticeship, Level 4, in partnership with skills bodies SQA and LANTRA, introduced a new company graduate programme which has since been rolled out across the sector with the help of the Scottish Aquaculture Innovation Centre (SAIC), and developed a bespoke course, in partnership with SAIC and Fife College, for first-time managers, helping them make the transition from farm team to farm manager successfully.

In addition, the company has introduced a Staff Learning Journey for every employee, mapping out a clear path of career progression, and revised the way it recognises and rewards its people paying an average salary above that for both Scotland and the UK – another determining factor in whether people choose to live in remote communities.

‘The vast majority of our 440-strong team live in the same communities as they work, over 200 of whom are aged between 17-28 years, so we know first-hand how important it is that skilled jobs and opportunities for career progression exist. By investing across these complementary areas, we’re helping to retain locals, encourage those who have previously left to return, and also attract new faces into these remote rural areas,’ said Scottish Sea Farms’ Head of Human Resources Tracy Bryant-Shaw.

Local training providers such as the NAFC Marine Centre on Shetland and Orkney, Fife and Inverness Colleges have also felt the benefits of the company’s investment, thanks to Scottish Sea Farms’ commitment to train locally wherever possible.

‘Scottish Sea Farms work hard to ensure their staff are qualified in their area of expertise to recognised national industry standards, with more than double the number of employees currently undergoing Modern Apprenticeships than anyone else in the sector,’ Stuart Fitzsimmons, Section Leader for Aquaculture at the NAFC Marine Centre.

‘The NAFC Marine Centre is proud to play a key part in this, delivering Levels 2 to 4, as well as aquaculture and maritime certificated short courses.’