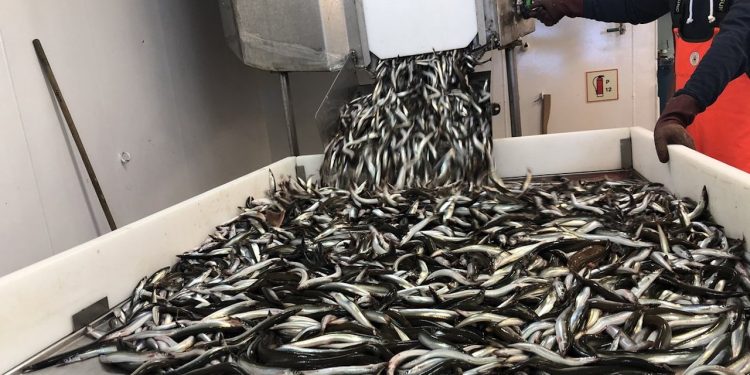 Norway’s Institute of Marine Research has advised a 60,000 tonne sandeel quota for its waters this year, a 59% reduction compared to the 2021 fishery.

‘There have been large quotas in the Norwegian zone in recent years. It was completely expected that it would go down from its peak,’ said Espen Johnsen, who oversees sandeel research at the Institute.

He commented that in the Norwegian zone there are large quantities of older sandeel, and a lot of five-year-old sandeel was fished in 2021. Sandeel is often considered a short-lived fish species, depending on recruitment from new year classes for good fishing.  With careful management of fishing effort, the researchers believe that it can be fished on the basis of strong year classes for many years. In recent years, there have been strong year classes in the North Sea, including 2016, 2018 and 2020.

‘Then we have the 2019 year class, which I would call super-strong. We see many older individuals, and that means that the fishing effort has been reasonable,’ Espen Johnsen said.

In the mid-2000s, the sandeel stock in the North Sea was in a poorer stare, but the stock has gained strength.

‘Then there was poor recruitment. In recent years, things have also been bad in the Dogger Bank area,’ he said.

Early indications of recruitment come from the December survey findings, although this does not provide clear figures as spring is a critical time for the fry. Survival varies greatly from year to year depending on how access to food is in the ocean.

On this basis, preliminary quota advice is always on the cautious side. In May, the researchers will update the advice following an acoustic survey, after which the advice can be increase, but not reduced.

A characteristic of Norway’s management of sandeel fishing is that the grounds are divided into areas, as sandeel are stationary and remain largely on its own sandbank. An area is kept closed if the spawning stock is too low, but fishing is allowed if the stock is strong. For each open area, at least 30% of the area remans closed to fishing to avoid an excessive reduction in each area.

This year, the whole of area 5, which is the northernmost area at Vikingbanken, will be closed as the population is critically low. All the more southern areas (1 – 4) are open for fishing.