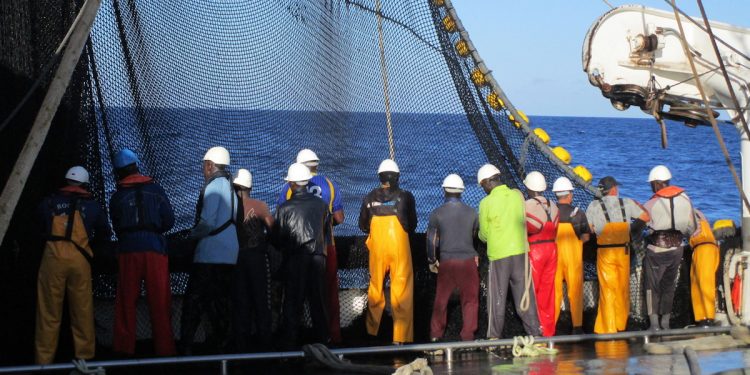 According to a study by Deloitte, carried out on behalf of a Spanish tuna industry group, the major corporate suppliers of Western Pacific canned tuna for European supermarkets are lax in watching out for and prosecuting violations of workers’ human rights in their tuna production chain, and their processes include no mechanisms of any kind for identifying modern slavery on board tuna vessels.

OPAGAC states that this is despite such practices are becoming increasingly frequent, especially in Asian fleets. According to the study, only 50% of these suppliers have processes for taking action in matters of human rights.

The study looked at 35 major canned tuna marketing groups throughout the entire value chain, showing that only 11% have internal policies and monitoring procedures to detect the risk of slavery, and just 17% have complaint mechanisms for employees built into their processes.

The fact that only one of these major groups explicitly prohibits slavery in its supply chain is especially striking, according to OPAGAC director Julio Morón.

‘In the European tropical tuna fleets, we’ve been complaining for some time that this is the area of the fishing industry that has the most systematic violations of human rights and slavery on board. And it’s something real – this is not a freak occurrence. It seems to be a trend, turning into a scourge that may be affecting thousands of sailors, without European consumers being aware of it. And what’s more, we have to bear in mind the latest census of Chinese fishing vessels operating the world over. That’s 17,000 vessels.’

The Deloitte study cautions that suppliers’ attitudes are clashing with consumer attitudes, as more and more big food retailers embrace sustainable product policies. In the case of fishery products, though, big food distributors are focusing more on environmental and biological sustainability than the kind of sustainability that involves human rights and working conditions.

This would explain why some major European chains are certifying the sustainability of their fishery products with various labels, but none are making it mandatory to have observers on board to verify certified fishing activities.

Julio Morón explained that onboard observers are the people responsible for verifying compliance with fishing rules and regulations, and nine of them have died on board vessels in the last five years, according to the Association of Professional Observers. The latest is Eritara Aati Kaierua, an observer from Kiribati who died on board the Taiwanese tuna seiner Win Far No 636 under circumstances that are being investigated. As a result, Win Far No 636 has lost its certification.

Based on replies from 11,000 customers of large European supermarkets, the study’s analysis of consumer attitudes found that in Spain 76% of consumers have switched to environmentally and socially sustainable fishery products. When asked what the leading factors in defining sustainability are in connection with canned tuna, the customers who value the protection of human rights and working conditions the most are those who shop at Lidl.

On a scale of 1 to 5, the protection of human rights and decent working conditions comes in on average as fourth among Spanish consumers, with 2.8 points; this score places it behind respect for marine resources (3.6), environmental impact (3.2) and lawfulness of fishing practices (2.9). However, Lidl shoppers consider human rights the third-most important element, giving it a score of 3.1, just slightly behind respect for marine resources and the environment (both of which score 3.5 among Lidl shoppers).

‘Consumer sensitivity to environmental sustainability seems to be gaining ground,’ Julio Morón said. ‘But I think the time has come for the European Union to deal with the humanitarian problem in fishing once and for all. We can’t keep importing fish, and at zero import duty, from companies and vessels that sneer at human lives. Consumers are starting to perceive the situation for what it is, and they’re starting to act against it, and the European tuna fleet is wondering what European politicians are waiting for before they do likewise.’