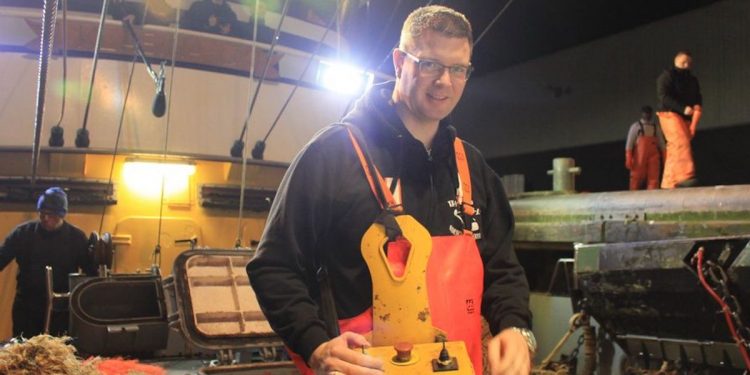 Good deal critical for everyone – on both sides

Skipper and EMK director Cor Vonk is certain that a poor outcome of the current Brexit negotiations could mean the end for the fishing business his family runs, as well as for many others in Belgium and Holland.

‘It’s of huge importance to Dutch and Belgian fishermen, fishing communities, fish processing and the fish trade that there’s a Brexit agreement. As a fishing industry, we run the risk becoming the victims of a political deal. For the EMK group, the interests of people take precedence over political interests,’ he said, speaking in the wheelhouse of the TX-1.

‘95% of our turnover is from UK waters, which may sound strange to outsiders, but this is the way it has been for centuries. Historical rights have been built up, and these can’t simply be cancelled – plus the fish we all catch knows no boundaries. It is important to us that the Netherlands, Belgium and France maintain their position in these negotiations.’

He said that for years he has been amazed at the fishing situation in Britain.

‘The British sold their fishing rights in the 1990s. We hardly see any British fishermen in the North Sea,’ Cor Vonk said.

He commented that without access the their traditional grounds in what will become UK waters, they will have no choice but to stay on the European side of the line, multiplying fishing pressure on those grounds. In addition, with space taken by wind farms and reserves, the Dutch fleet will be left with fishing grounds hardly bigger than a postage stamp.

‘That’s overfishing, and it’s no use to anyone. While at the moment fishing and the marine environment are still well balanced,’ he said.

‘English fishermen are being misled. They are promised everything, but will soon be worse off than they were within Europe. Britain has been at the forefront of formulating new rules and legal threats to fishing for years and that’s not going to change. The landing obligation is an idea that came from Britain. Boris Johnson is taking a lead in offshore wind farms. It’s the same with marine protected areas. Europe aims for 30% protection, but Britain has already announced it wants to increase this to 40% for their waters.’

He feels that British fishermen have played with a fire that has been stoked for political gain.

‘At least 70% of their catch is exported to Europe, so it’s not going to be comfortable for them. British fishermen can expect a rude awakening – and that applies to us as well if things don’t stay close to the way they are. So keeping our negotiators on track is in the interests of both European and British fishermen,’ Cor Vonk said.