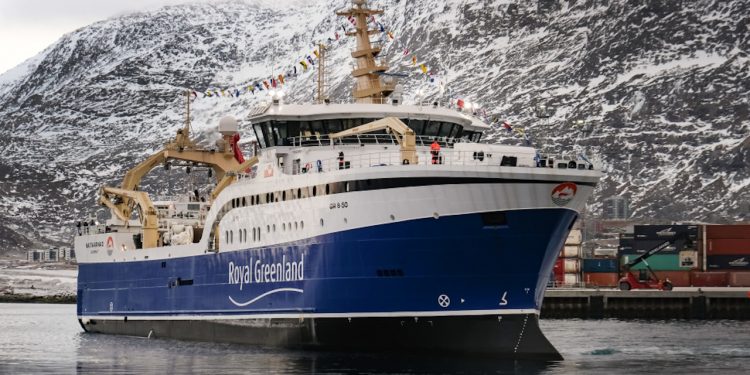 Ice Trawl Greenland’s shrimper Nataarnaq docked in Nuuk at the end of January with a full fishroom to end the new trawler’s first trip.

‘There’s nothing unusual about new trawlers having start-up troubles, the technical issues that come with a brand new ship. But the crew of Nataarnaq, which started fishing at the beginning of the year, have had a smooth handover from the old vessel to the new one,’ said Ove Rosing Olsen, the chairman of Ice Trawl Greenland’s board.

‘We handed over the old ship to Royal Greenland on 27th December 2021, and by 2nd January 2022, the new ship was at work. Everything seems to work really well right from the start.’

According to chief engineer Asbjørn Petersen, the new trawler burned 16 tonnes of diesel per day, which is the same as the old trawler which was smaller and with a lower-powered engine.

‘With a larger average daily catch, we use less fuel per kilos of shrimp caught, which helps to reduce the environmental impact of our production. It is very positive in a world that is becoming more environmentally conscious every day,’ he said.

Skipper Davur Mohr’s first impressions of the new trawler have been positive, although they are still getting to know the trawler, he can already see future opportunities for activities in other waters.

‘We have almost exclusively fished with two trawls, as we need to get to know the ship better,’ he said, commenting that the ship is far very seaworthy with good manoeuvrability.

‘We maintained constant towing speed, even in heavy weather. That there is no motion transmitted to the trawls while towing and we didn’t have any water on deck.’

With 1100 tonnes of shrimp caught in the first trip, the results already show that the new Nataarnaq is more than 40% more efficient than the trawler it has replaced. For skipper Davur Mohr, this greater capacity opens opportunities in other waters in future. 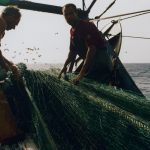