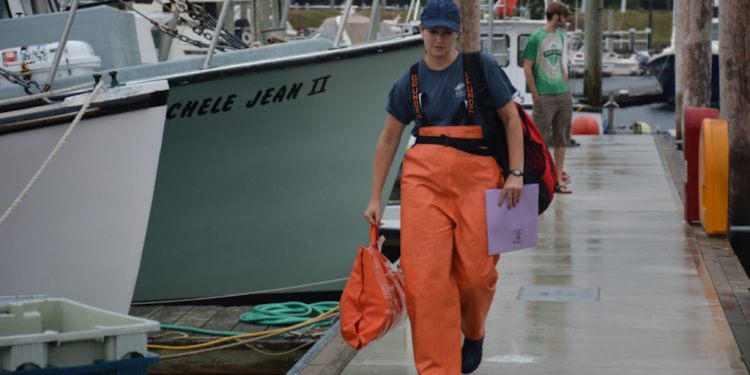 Expanding Electronic Reporting Across the Pacific

Observers on the US West Coast are transitioning from paper forms to a more efficient and accurate tablet-based system.

NOAA fisheries observers often face a daunting task on commercial fishing vessels. With the wind whipping and the boat rocking, they must record key data as the crew hauls in catch. If they see a whale breach near the boat, they have just seconds to observe and write down all the details of that interaction.

But first, they have to shuffle through five different waterproof paper forms to find the right one to fill out.
However, for observers in the West Coast deep-set buoy gear fishery, such as Nickolaus Green, Lewis Koplin, and Matthew Speegle, this is all changing.

The three tested the Onboard Record Collection Application project, or ORCA, an initiative of the West Coast Region Observer Program. Previously, they wrote everything down and then entered it into a computer when they returned to land. Through ORCA, observers input data directly into a waterproof Android tablet at sea. The ORCA system is replacing the current paper based system.

The tablet touchscreens let observers shift seamlessly between data entry fields instead of shuffling paper forms. They also record time and location at the push of a button, saving observers from chasing down the co-ordinates from the crew.

‘The observer becomes less reliant on the crew for gathering crucial information pertaining to fishing effort, which saves time for both the observer, captain and crew,’ notes ORCA project co-lead Jody Van Niekerk, a fisheries biologist in the West Coast Region.

‘This enables the observer to stay focused on their duties without any unnecessary distractions.’

Drop-down options enable observers to move faster through the data-entering sequence and minimise questions to the crew. For example, once a vessel name or species name is selected, the accompanying permit number or species code is automatically populated. Built-in cameras mean that observers don’t have to reach for another device to take a picture of incidental catch or by-catch species for later review and identification.

The application means observers don’t have to be concerned about organising paperwork at the end of a fishing day, or after a trip is done. When they use paper forms, observers must personally deliver them to the observer provider’s office in Long Beach. A debriefer assists the observer in going through the data, noting any mistakes, and entering it into a secure computer. This could potentially result in a long drive if the observer is commuting, after a long trip at sea.

‘Uploading the data is the easiest part,’ according to observer Lewis Koplin,adding that it takes about 30 seconds for the data to be uploaded and backed up, once in Wi-Fi range.

‘We no longer will have a four-hour round-trip drive to spend 45 minutes filling out forms,’ said observer Matthew Speegle.

While the observer takes a well-deserved break, the observer provider and NOAA Fisheries staff can do quality control checks of the data. They provide immediate feedback, without needing to co-ordinate an in-person meeting with the observer.

Jody Van Niekerk is quick to stress that the tablets are more than a convenience for observers. ORCA is improving the timeliness and quality of the observer-collected data that is critical to sustainable fisheries management and the protection of marine mammals, birds and sea turtles.

‘The more you can shorten the path between the data entry method and the database, the less likely you are to end up with inaccurate or bad data,’ he said.

‘You cut out those quality control slips. Observers can now spend more time on biological sampling and not worry about data forms getting soaked or blown away. It’s so much easier and efficient.’

While the observers have continued to use paper forms as back-up during the testing phase, they are looking forward to going completely paperless.

The tablets definitely make our job a lot easier in terms of organization and keeping track and getting information down correctly,’ Matthew Speegle said, while observer Nickolaus Green may have summed it up best, noting that he’s ‘pretty pumped to eliminate the paperwork and [put] the tablets to full use.’

ORCA has been followed closely across the Pacific. Jody Van Niekerk and several others active in the project serve on the Pacific Highly Migratory Species Professional Specialty Group. This unique partnership of fisheries-dependent data specialists is focused on creating an integrated, accessible Pacific highly migratory species data governance program. The group is part of NOAA Fisheries’ Fisheries Information System program. This state-regional-federal partnership supports sound, science-based fisheries management by fostering collaboration and – with support from the Electronic Technologies and National Catch Share – funding innovative projects such as ORCA.

Through connections forged by the group, Jody Van Niekerk and his team have shared lessons learned with colleagues in the Pacific Islands. They are working with the Pacific Islands Regional Observer Program to design and implement ORCA 2, a data entry application for the pelagic longline fishery. Both regions will share the application to facilitate data entry by pelagic longline observers from both observer programs.

‘The group is a great initiative, because it makes us think about what projects we can work on together, especially when we are working on similar goals at the same time,’ he said.
‘It’s a much more efficient use of resources.’