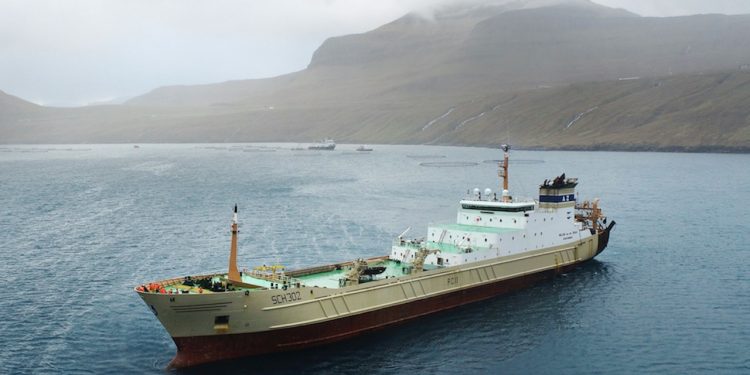 Vónin’s 2300 metre pelagic trawl has been around for a while and has already proved what it can do for the Faroese, Icelandic, Norwegian, Russian and UK fishing vessels that have been using this gear. Now Dutch pelagic catchers have also been calling in Fuglafjørður to pick up these versatile trawls.

P&P’s Annelies Ilena was the first to take a 2300 trawl, back in 2018, and it has served them well on blue whiting, as well as being versatile enough to also fish herring. This year, three more Dutch pelagic vessels have been supplied with these trawls, with Maartje Theodora calling in the spring to collect its gear, followed by Margiris a few weeks later, and finally Willem van der Zwan.

‘This trawl has fished outstandingly well for our customers around the North-East Atlantic who have been using this gear for some years. It fishes especially well on blue whiting, and this trawl accounts for the largest share of blue whiting landings,’ said Vónin’s Frederik Hansen.

The trawl was originally developed for the blue whiting fishery, but with the right belly it also fishes well on herring and has also returned good results on other target species.

‘The Dutch skippers have all opted for the belly design optimised for more than one species, and this is all down to the very good experience that Annelies Ilena has had with the 2300 trawl,’ he said.

The 2300 trawl’s front sections are spliced in Vónin’s own Capto rope and generate a carefully shaped trawl configuration that tows well, with as little towing resistance as possible.

‘The 2300 trawl has performed very well. It has a very good opening and the skippers’ feedback is that this trawl helps them fish more effectively than before.’