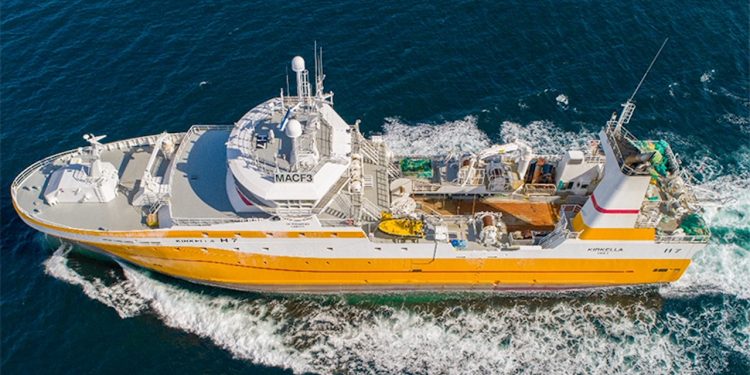 End of the line for UK distant waters fishing?

Hull-based fishing company UK Fisheries fears that a lack of fisheries deals with Norway, Greenland, Faroes will scupper the fleet.

‘The EU deal is done, but for English distant waters fishing the future is anything but certain. Kirkella is tied up in Hull. Right now, we’re not supporting jobs upstream or downstream. We’re not generating wealth in the form of inward investment and UK taxes,’ a representative of the company said, and asked if the UK government will do the deals needed to keep our crews at work in 2021.

‘Does it intend to? As of now we don’t know when, or even if, we will be able to put to fish off Norway, our main fishing ground for decades.’

This isn’t a new story, and UK Fisheries has been lobbying for answers from the UK government for more than two years.

‘There is little sign the UK government has listened. Without individual bilateral deals on quotas with Greenland, the Faroes and especially Norway, there is no long-term viable distant-waters fishing industry in the UK. We may be able to scrape by for a few weeks fishing off Svalbard, but that alone can’t keep the industry afloat. And as far as we can tell we’re the only business in the UK fishing industry whose very existence has been put in jeopardy by such avoidable government inaction.’

According to the company, as the situation persists, crews will seek work elsewhere and the company’s European shareholders will not be inclined to watch their assets depreciate, while a planned further investment of £60100 million will undoubtedly be gratefully received elsewhere.

‘So much for all the grand post-Brexit promises of ‘prodigious amounts of fish’ and ‘seas of opportunity.’ What is most frustrating is that all the government needs to do is agree with Norway (and Greenland and the Faroes) that we can continue fishing on existing terms – or, now that the EU is out of the way, to make better bilateral deals,’ UK Fisheries’ representative said.

‘Imagine a £50m factory on shore that wasn’t able to work just because the government had failed to hold a negotiation that, compared with the EU deal, will be the simplest imaginable; one that we have been asking it to have for years,’ the company said.

‘The alternative – and one that gets closer for every day that goes by – is a dismal end to English distant waters fishing. That would be outcome of all those plans to ‘take back control.’ What truly sovereign government would sit back and allow this to happen?’