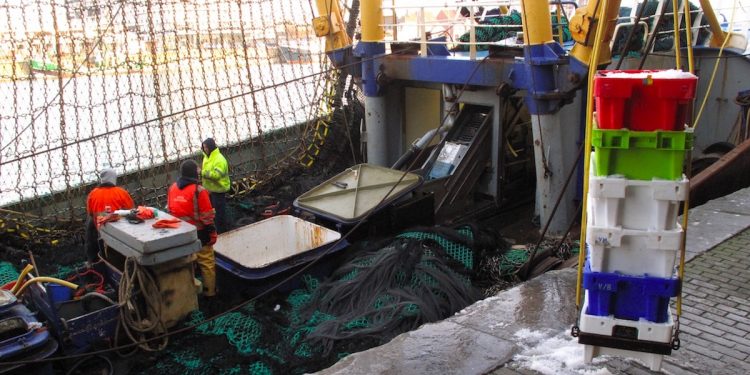 Two days of intensive negotiation has resulted in an agreement that reconciles the objective of securing healthy stocks with the need to ensure the socio-economic sustainability of the EU fleet, according to European fishing industry body Europêche.

‘The latter was acknowledged by the Council which, after a predominantly conservationist proposal from the European Commission, adopted a better-balanced decision in light of the socio-economic data provided by Member States,’ said Europêche managing director Daniel Voces, adding that the industry will face many challenges for next year due to the extreme quota reductions and restrictive measures adopted for key species such as cod in all EU waters.

‘The result achieved is a step forward in the right direction to continue the EU lead in sustainably managing fish stocks. Generally speaking, the political agreement will provide the necessary measures to protect fish stocks and at the same time allow vessels to continue fishing in a sustainable manner. Having said that, the survival of many fishing fleets will be put to a test in light of the huge quota reductions, particularly in the Celtic and North Sea, to comply with the ambitious objectives set in the CFP,’ he said.

‘During the last decade many efforts have been made by the EU fishing fleets to rebuild fish stocks to the point that, next year 99.4% of the landings in the EU from the North-East Atlantic will come from healthy stocks. Difficult decisions have been made to achieve these levels. The industry supports quota reductions, when and where needed, that are consistent with maintaining the fabric of the fishing industry and coastal communities, but not just to sustain a rigid interpretation of fisheries rules.’

Europêche has welcomed that the quota cut proposed for southern hake was reduced from -20% to -5%, in line with the multiannual plan. Concerning northern hake, despite last year’s increase, the Council endorsed the Total Allowable Catch (TAC) reductions of around 20% for all other hake stocks in the rest of Community waters.

These stocks show healthy biomass levels, so a limited reduction in fishing pressure is expected to be sufficient to keep the stocks in good shape, according to scientists.
The reduction in North Sea saithe by 15% in spite of the good results yielded last year is seen as regrettable, while the Council adopted a roll-over for whiting in the North Sea as well as steep quota reductions in other relevant areas such as the Celtic Sea by 43%.

Common sole stocks generally see increased catch limits thanks to the good state of the stock and the flatfish situation in the North Sea is extremely favourable with the stocks for both main species, sole and plaice, well within the MSY limits. Therefore, TAC’s could be raised by 40% and 17% respectively, which Europêche says is especially an encouraging sign for the fisheries dependent communities.

Last year the Council decided to reduce the TAC for haddock in the North Sea by 30%, and subsequent positive results for this species has resulted this year in a 23% increase. For Celtic waters the Council decided to endorse the Commission’s proposal to increase the haddock TAC by only 30% despite the 100% advised by ICES.

Much of the focus has been on cod – one of the main and most difficult decisions that had to be taken. The Council mitigated some of the cuts proposed by the Commission (as much as -88%), nevertheless according to Europêche the fishing fleets targeting these stocks are faced with a drastic situation. In Celtic and Iberian waters last year’s hefty cut of 48% is furthermore reduced to another 50%.

‘This will come as yet another nail in the coffin for many fishermen,’ Daniel Voces said.
Due to the difficult situation of cod and whiting stocks, the Council decided to introduce, apart from the previous safeguard measures, remedial measures such as higher mesh sizes to increase selectivity and reduce by-catch.

Europêche reminded the Council that concrete, rational and responsible measures for the protection of these stocks were proposed by the sector within the regional context under the recently adopted western waters management plan. Europêche argues that these were ignored and the Council has taken the strange step of adopting new technical measures through an EU law, disregarding the efforts made at regional level and returning to unwanted micromanagement that goes against the spirit of the Common Fisheries Policy.

‘In particular, the imposition of a new type of trawl from 1st June 2020, will not allow fishermen to face the problems without causing heavy losses for the many vessels concerned,’ he said.

Megrim stocks continue to show steady growth rates in all areas, particularly in the south which sees a TAC increase of 24%. The sharp quota cut in horse mackerel of up to 41% in northern areas contrasts with the good results in the south. Despite the Commission’s plans to reduce catch limits by 50% in Iberian waters, the quota was increased by 24% in line with the ICES advice.

The agreement reached with Norway on jointly-managed stocks in the North-East Atlantic either followed the ICES advice or rolled over the same arrangements as last year. Following the scientific revision of the mackerel stock a TAC increase of 41% has been adopted.

‘2019 was just the first year that the landing obligation was applicable to all EU fisheries, and in light of the difficulties faced by EU fishermen, the Council decided to extend an extra year the pool mechanism for quota exchanges between Member States,’ Daniel Voces reports.

‘This measure is welcomed by the sector, as fishing vessels with low or no quota for certain species would have to cease fishing operations even if they still have quota for other species in the same area. ’

‘For the first time ever fishing opportunities were decided for the Western Mediterranean Sea. It was agreed that the fishing effort for demersal species will be reduced by 10% as laid down in the management plan to continue rebuilding fish stocks,’ he said.