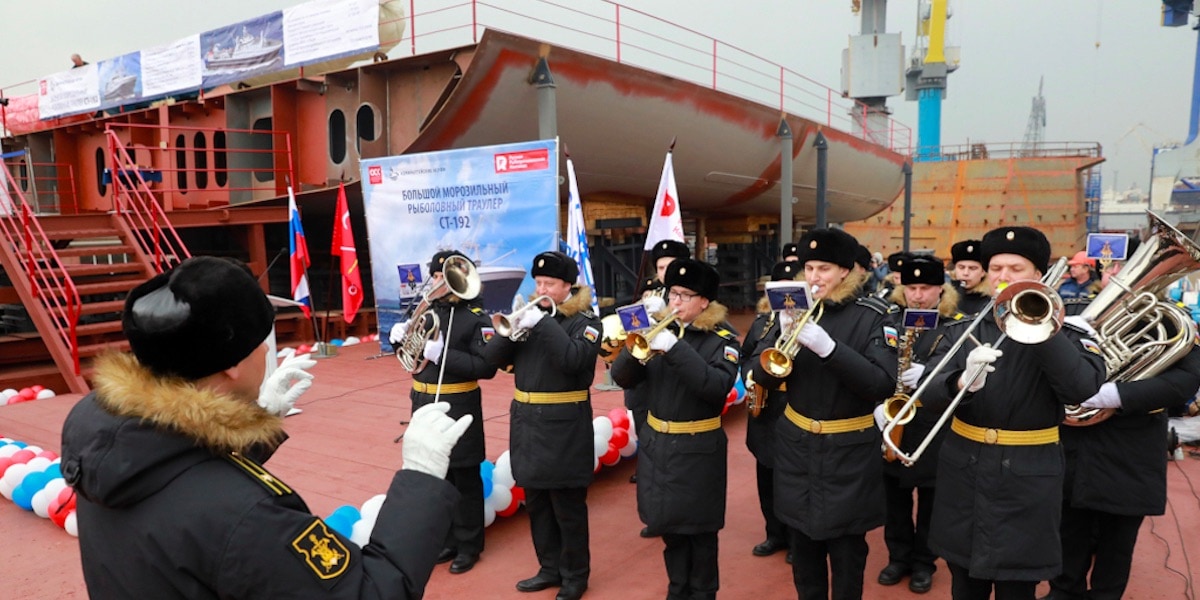 The keel of the second of a series of new generation trawlers for the Russian Fishery Company has been laid at the Admiralty Shipyard at St Petersburg.

The keel-laying ceremony for the ST-192 trawler was well attended, with deputy head of the Federal Agency for Fisheries Petr Savchuk taking part.
‘We are laying the second super-trawler of the “longest” series of vessels of this class being built today in Russia,’ said RFC’s CEO Fedor Kirsanov.
‘This is a clear confirmation of the effectiveness of the state programme of investment quotas, thanks to which RFC, our fishermen, the fishing industry will take delivery of new, high-performance vessels, of a type that has not been constructed in Russia before. Russian shipyards are provided with orders for several years ahead, civil shipbuilding has received a powerful impetus for development, and our company gets the opportunity to reach a new level of efficiency, environmental friendliness and safety in its fishing activities.’
‘The Russian Fishery Company is constructing a series of the most advanced high-tech trawlers with waste-free production, which will create all the conditions for crew comfort, for production safety,’ said Petr Savchuk.

‘The efforts that both the company and the shipbuilders make deserve great respect. The future of the construction of fishing vessels depends on the implementation of this project.’
The keel of the first trawler in the series was laid in January this year. So far, about 15% of the sections of the first vessel have already been assembled on the slipway, and more than half of the metal has been processed for its construction.
The launch of the first two trawlers is scheduled for the first half of 2020, with commissioning scheduled for 2021. The whole series will be built in pairs, two vessels a year with an interval of three months between the keel laying and the gap of about a year between each pair.
Each new vessel, which will be built for the Russian Fishery Company, is designed for an annual catch of more than 50,000 tonnes. This is twice as much as the performance of the vessels currently operating for RFC and other Russian companies.
These 108 metre, 21 metre beam vessels will be equipped with modern factories capable of waste-free processing of the entire catch into high value-added products, primarily pollock fillets and surimi.
The Admiralty Shipyard is scheduled to build six vessels for RFC by 2023, all of them as part of the state investment quota programme under which RFC will receive an additional 170,000 tonnes of pollock and herring quota annually.
The company plans to build no less then three more vessels, and the decision of the Federal Agency for Fishery on the applications for the construction of four trawlers is expected this year.

RFC forges ahead with modernisation programme