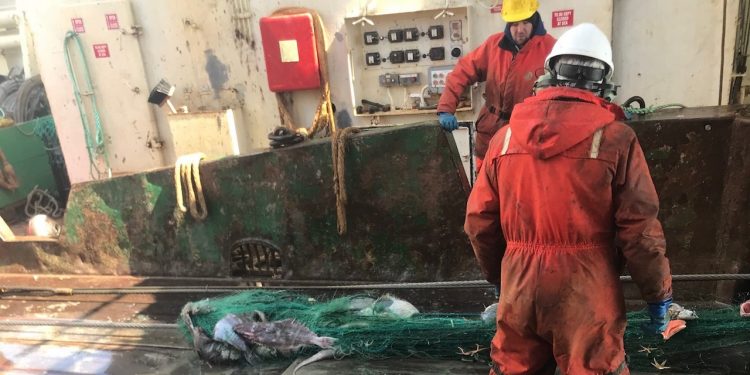 Some shrimp and turbot vessels in Canada’s offshore fishery will be participating in a pilot project with Fisheries and Oceans Canada (DFO) to help tackle challenges created by lost or abandoned fishing gear.

Andrew Titus spent a career in the offshore fishery, including many years as captain of Mersey Seafoods’ northern shrimp vessel Mersey Phoenix, and explained that in addition to being harmful pollution similar to trash in the woods, the ghost gear continues to kill fish in perpetuity, harming fish stocks.

‘With crab pots, crabs will go in, they’ll die in there because the pot is lost and not being tended to. Then that crab becomes bait, attracting more crab. That cycle just continues over and over. With gill nets, it is much the same. Fish get inside the net and die, as they rot, they make space for more fish to enter the net,’ he said.

When fishing in harsh conditions, losing gear is sometimes unavoidable. Andrew Titus estimates that a crab season with significant ice or a groundfish season with a lot of summer and fall storms is often the cause of gear becoming lost or abandoned.

This ghost gear sometimes gets entangled in offshore fish harvester’s fishing gear and comes aboard the vessels in the trawl. Current regulations don’t allow them to bring it in to be responsibly discarded, which puts harvesters in a difficult position.

‘As harvesters, we have a lot of respect for the ocean. It’s pristine and we want to protect it, to keep it as clean as possible. So when we see ghost gear that is polluting the ocean and killing fish unnecessarily, we know it’s a problem and we want to be part of the solution. We want to do the responsible thing and bring it ashore to be disposed of,’ Andrew Titus added.

The Canadian Association of Prawn Producers, which represents offshore shrimp harvesters, proposed the changes to DFO in 2019 and the pilot project begins this summer. For the pilot project, harvesters will be able to safely retrieve and responsibly dispose of ghost gear that is entangled in their own gear.

It is CAPP’s hope that a successful pilot project will result in more fishing vessels being authorised to safely retrieve and responsibly dispose of ghost fishing gear.

Longliners head back to Jan Mayen