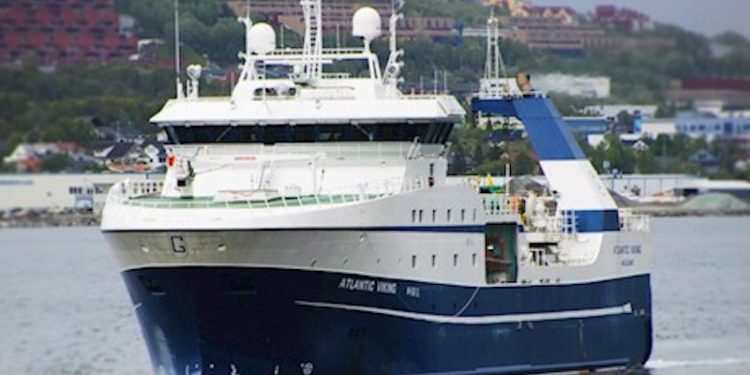 Vónin’s Flyer lift device has been through a long development process, with positive results, according to Óli Horn at the company’s demersal fishing gear division. One of the challenges was to find the right material that was strong but without being too rigid, and now that this is available, Flyers have been in regular use since the beginning of this year.

The Flyer is a device rigged to a trawl’s headline to generate lift, and the faster the towing speed, the more lift is produced.

‘One Flyer is 80cm, so it takes up the same space as four floats,’ Óli Horn said. ‘For towing at 3.5 knots, then each Flyer generates 85kg of lift, so at that towing speed, it’s equivalent to around thirty normal floats.’

The Flyer has really come into its own on Greenlandic trawler Tuugaalik, which has been fishing deep water for Greenland halibut, and this fishery calls for the headline to be tightly packed with floats, but instead four flyers on the headline have replaced the additional floats that would normally have been rigged to the headline of the new trawl that had been ordered for the Greenland halibut season.

Russian trawler Aquamarine has also been regularly using flyers on its 630 Balacao trawl, fishing in the Barents Sea for cod and other groundfish.

‘The trawlmaster told us that they use two or three flyers, and they have come up with their own way of rigging these, with an additional float each side to make sure that the flyer squares away properly without snagging under the headline – and this has never been a problem,’ he said.

Atlantic Viking could fish when others could not

In Norway Atlantic Viking and Granit both have flyers on board, and Óli Horn explained that Atlantic Viking has its trawl’s headline rigged with around 1200kg of buoyancy, using a variety of float sizes.

‘They were able to take off 200kg of buoyancy and replaced this with two flyers, so that’s 30 to 35 floats per flyer. The skippers tell us that these work well in the spring when they are fishing for cod, and in some areas the fish are tight on the ground to begin with. But once a couple of trawlers have been fishing for a while, the cod can lift off the bottom and swim higher in the water,’ he said.

The result is that for the trawlers with a standard headline height, the fish rise too high for them to be able to catch them easily.

‘Adding a couple of flyers to the headline gives them an extra two metres of headline height, so they can fish for an extra day there while the ones with the lower headline height only get one good day’s fishing. It’s also good for haddock, as these often swim high off the bottom and can be difficult to catch, but the flyers give you some extra headline height that helps reach the haddock,’ he said.

So far, one trawler in Canada has been using flyers to lift its shrimp trawls, and this is reported to work well, despite the reduced lift generated by the low towing speed.

‘This is something that we need to do more tests on,’ Óli Horn said. ‘But interest in the flyers is certainly growing.’