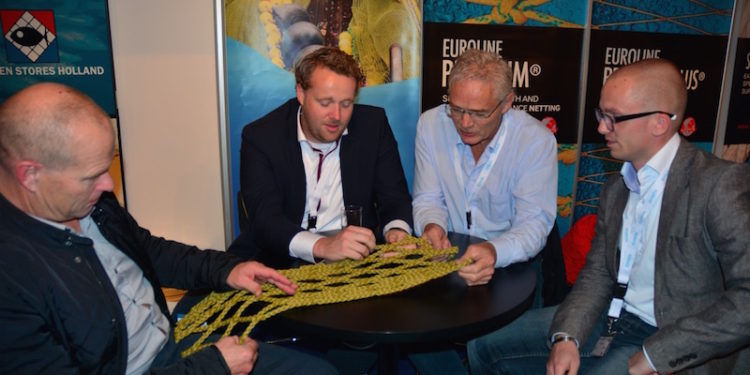 This year’s Holland Fisheries Event is set to take place in Urk on the 7-8th of October, and the event has become a regular feature of the Dutch fishing industry.

Catering primarily to the Dutch fishing industry, it also attracts visitors from Belgium, Denmark and Germany, according to event co-ordinator Paula van der Woude, as well as a range of Dutch, Belgian and Danish exhibitors.

The Holland Fisheries Event chairman, Klaas-Jelle Koffeman is a former skipper of the beam trawler FD-182, having come ashore in 2014.

“We had a main engine failure and with the way the fishing industry was looking in 2014, with low fish prices and very high fuel costs, we saw no reason to invest in having it repaired, so the boat was scrapped and I came ashore,” he said.

“Nobody could have foreseen the changes in the last few months of 2014 as prices improved and fuel dropped in price. Last year was an extremely good one for Urk, one of the best we have ever had, and this year looks to be a good one as well,” he said.

“The demand for North Sea fish is strong and the prices are decent, nothing that we can complain about. Of course, they were ridiculously high in the first week of the year, but now they have settled back to a normal level but are still good. We expect them to improve as the fish start to get a little more meat on them.”

Now ashore and managing the Holland Fisheries Event with Paula van der Woude and Caroline Melissant, he is also chairing the Urk Fishing Days – which has had to be cancelled this year for several reason. One is that repairs are being done to harbour facilities and dock gates, while the extraordinarily high level of activity around windfarm work at the moment on the IJsselmeer near Urk means that the harbour is fully occupied, leaving little space available for the Fishing Days.

“We’ll hold it next year, which means that there will be an event in Urk every year; the exhibition this year and the Fishing Days next year.”

Paula van der Woude said that this year’s exhibition builds on the success of the 2014 event.

“The fishermen who attended were very positive about it and we’re looking forward to seeing them all back this year, plus some more. We had visitors from neighbouring countries as well, mostly from Belgium, Germany and Denmark.”

Klaas-Jelle Koffeman added that, as in previous years, buses are being laid on for fishermen from the south of Holland to come to Urk on the second day of the exhibition.

“That means they can have a drink and we’ll make sure they get home safely,” he said.