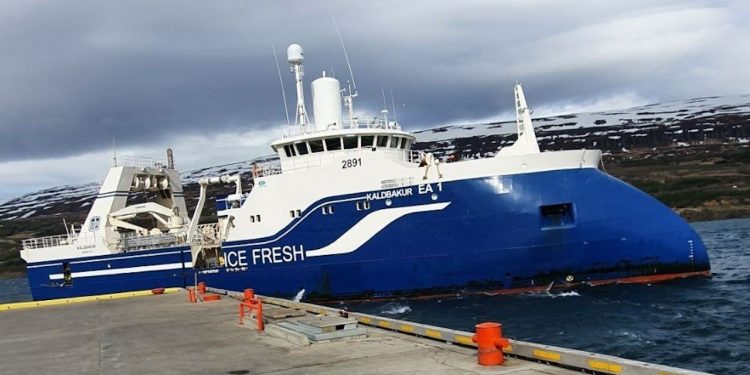 Trawler’s catch on its way to French consumers

Fresher trawler Kaldbakur EA-1, operated by Útgerðarfélag Akureyringa, landed 190 tonnes of top-quality fish after only five days at sea, and the processed catch was with consumers in France later that same week.

‘We were fishing for three and a half days, plus a 17-hour steam each way to and from fishing grounds off the west coast,’ said skipper Sigtryggur Gíslason, adding that Kaldbakur sailed for the same grounds again as soon as its fish had been landed.

‘Most of the catch is cod, plus some saithe, and we averaged nine tonnes per tow in this trip. It’s vital to handle the catch as well as possible, and to land it as its freshest. All the catch handling processes on board centre around maximising quality. There are thirteen crew on board and this is a very well co-ordinated crew with plenty of experience. We work two full crews and the current crew will be going ashore after the Seamen’s Day break.’

According to shore production manager Gestur Geirsson, Kaldbakur’s catch is mostly processed at the factory in Akureyri, while some of it has gone to the Dalvík factory for processing, and most of this had been processed within a couple of days.

‘This is quality raw material and most goes to our customers in France, shipped both by air and by sea. Processing is fast, as our customers want the fish as fresh as possible. Fish shipped by air to France reaches customers the same week. To make all this possible, there’s a lot of co-ordination and careful organisation.’

He commented that the Seamen’s Day break on the first weekend in June presents some challenges to production, as there will be no landings during the following week.
‘So there will probably be three trawlers landing on the Friday. It all works out, and it’s easier when fishing is as good as it has been recently,’ Gestur Geirsson said.