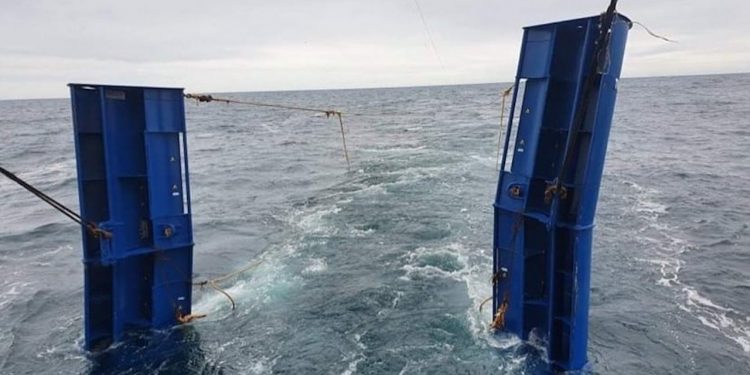 Thyborøn Trawldoor has begun the rollout of its Type 32 Bluestream pelagic trawl doors, a major development in efficiency and a big step towards full control of the doors during a tow.

The Type 32s use the same Bluestream technology as successful previous designs, but with further refinements that push the efficiency of the new doors still further, making it possible to scale down the doors even more to achieve a greater spreading force.

Test pairs of Type 32s have been through extensive trials in Greenland and Iceland, and most recently on a Dutch pelagic trawler, and now the first production pairs of the Type 32 doors have been supplied to Faroese and Shetland pelagic vessels.

A key feature of the Type 32 doors is the adjustable foil sections that allow the doors to be adjusted, and this is a step on the way to achieving full control of the doors.

Thyborøn Trawldoor was ahead of the game when it introduced Flipper doors some years ago, with panels that could be opened or closed to alter the surface area of the doors to suit conditions or different trawl gears, and the company has been working on refining this further.

The latest version allows the upper and lower foil sections of each door to be adjusted, with both a straightforward manual option with the foils locked in place, and a hydraulic version that is quicker and easier to adjust, as well as offering more options. The adjustment is carried out with a small hydraulic pump fitted to an attachment point on each door while the doors are hung in the gallows and a few strokes with the small hand pump is enough to align the foils as required for the type of fishing and the trawl gear.

Both Jupiter and Antares opted for the hydraulic version of the Type 32 Bluestream doors.

With more development in progress, both on an adjustable towing point and remote control of the foils, before long Thyborøn Trawldoor expects to be able to offer full control of its Type 32 trawl doors with the gear in the water, allowing the gear to be adjusted during a tow.