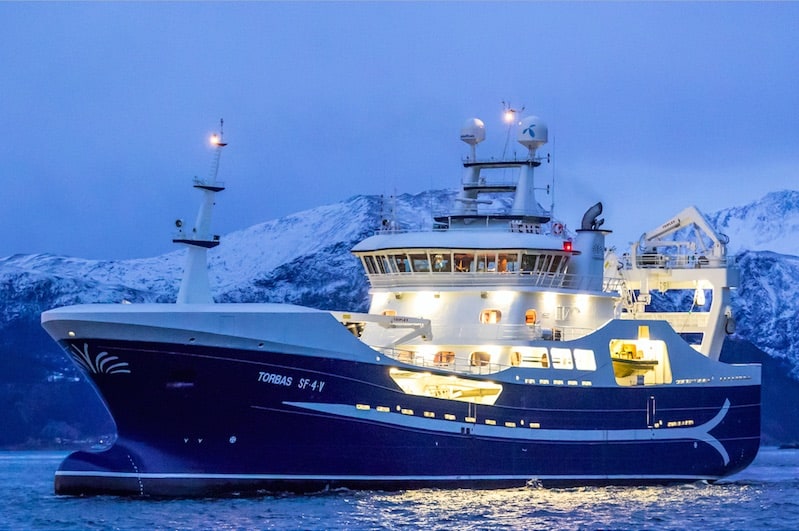 Faroese company Framherji is reported to have struck a deal for the purchase of pelagic vessel Torbas from Norwegian owners Vågsøy.

According to Faroese media reports, the 70 metre purser/trawler will be delivered in the first week of January. No purchase price has been mentioned, although present owners Agnar and Tore Lyng are believed to have invested NoK 200 million in the vessel’s construction. Torbas was delivered in early 2015.

Torbas was designed and built in Raudeberg in western Norway, with the design by Seacon and the ship’s construction completed at Stadyard on a hull built in Poland.

It has a 69.90 metre overall length, a 15 metre beam, and a 2050 cubic metre capacity in eleven tanks, chilled by a twin 1130kW Optiflex RSW system from MMC Kulde and with a Tendos vacuum pump system.

The innovative Seacon design features a high freeboard for optimum safety and the ship has been carefully insulated to ensure low noise levels. Torbas also has a large diameter propeller, which is not set inside a nozzle, improving fuel economy as well as contributing to reduced noise.

The main engine is a 4000kW MAK 8M32C driving a 4400mm diameter Scana Volda CP105 propeller via a Scana Volda two-speed reduction gear, while an AEM shaft generator routes power to the ship’s system, and can also be used to provide a 1500kW boost to the ship’s output on the main shaft via a PTI, taking power from the twin 994kW C-32 Caterpillars.

Torbas has Rapp Hydema trawl handling deck equipment and the purse seine package is from Triplex, including a 1020/600 Super Jumbo hauler.