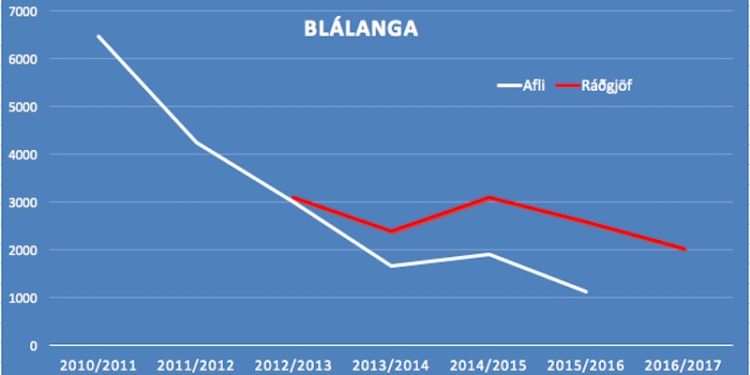 Iceland’s National Association of Small Boat Owners (NASBO) has questioned the authorities on its management of blue ling, which was not a quota species until the 2013-14 quota year, asking why advice has been for significantly higher amounts than have been landed, while management has not been effective in rebuilding this stock.

According to NASBO, the association criticised the then-fisheries minister’s decision to place little redfish (Sebastes viviparus) silver smelt and blue ling as quota species, arguing that this was a sure route to trouble. The associations fears were well founded, with endless difficulties encountered by small boat fishermen unable to buy blue ling quota to cover exceptional catches.

NASBO proposed prohibiting direct targeting of blue ling on known spawning grounds sough of the Westmann Islands and in the area known as the Frenchman’s Hole, while the minister responded to the effect that the law states that when species that have been fished but not previously subject to quotas are subject to management, then a quota is a condition.

According to NASBO, quotas have been significantly at variance with catch leveles during the preceding reference period, with more than 40% of quotas allocated to two companies, and with 24 vessels out of 244 allocated a blue ling quota holding 75% of those quotas.

NASBO director Örn Pálsson has already urged the minister of fisheries to review the legislation, particularly in the light of the mackerel fishery and the phrase quoted in law; ‘unbroken fishing track record.’

‘I repeat that it is necessary to make changes to the 9th clause to provide flexibility for other approaches to management than quotas being set, when this is applicable. Blue ling is a clear case in point,’ he said.

Since then, NASBO points out that the blue ling stock’s recruitment index has been at a historical low since 2010.

‘It’s noticeable that catches in recent years have been well below the recommended levels, so it’s worth asking the reason for the poor state of the stock,’ NASBO said, commenting that it is food for thought that the Marine Research Institute continues to recommend quotas that are much higher than catches.