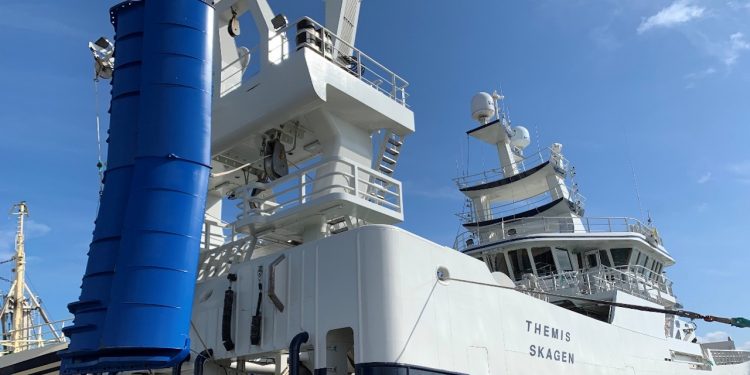 The future is controllable

Thyborøn Trawldoor is in the final stages of testing control technology for its Type 22 Bluestream doors, with successful initial trials carried out on board Themis S-144 earlier this year and a second round of testing to confirm the results about to commence.

The high-efficiency waterflow of the company’s Bluestream technology has already proved its value for pelagic fisheries, as well as for groundfish with the doors flown off the seabed as they spread demersal trawl gear.

The Type 22 doors also come in Flipper versions, fitted with up to four flaps that can be opened to reduce the surface area of the doors by up to 11%, providing adjustment options for switching gears. This makes the Bluestream doors among the most versatile trawl doors on the market.

Now the Bluestream design is set to be given even more versatility as the company’s designers have been working on a hydraulic system fitted to the leading side of the door, enabling the skipper to adjust the towing point during a tow, altering the roll of the doors without having to haul the gear and manually shift the warp to a new towing point.

‘This means that the shape, symmetry, positioning and depth of the trawl can be adjusted remotely,’ Henrik Andreassen said, following the initial trials on board Themis earlier this year.

‘We were able to adjust the doors wirelessly from Themis’s wheelhouse, and saw that we could easily lift the doors from being hard on the bottom in 60 fathoms to just beneath the surface in a manoeuvre that took only a few minutes. This is a gamechanger, not just for pelagic vessels, but for groundfish trawlers as well.’

Thyborøn Trawldoor has already delivered a number of pairs of it Type 22 Bluestream doors that are prepared for the control system to be added, and as soon as the last stage of testing the doors and the control system has been successfully completed on board Themis, these doors will become commercially available – and there’s already a waiting list.

‘It has been a long process,’ he said, commenting that this started with extensive flume tank tests before the first full-scale trials took place, and since then they have been refining the system which is powered by a long-life rechargeable lithium battery.

‘The advantages of having control of the doors are clear. This enables precise positioning, maintaining a distance to the surface or the seabed. The gear’s depth can be adjusted more quickly and it can be positioned more accurately for the target species, plus the symmetry of the gear can be maintained in a cross-tide and it’s possible to come about while maintaining the full door spread.’