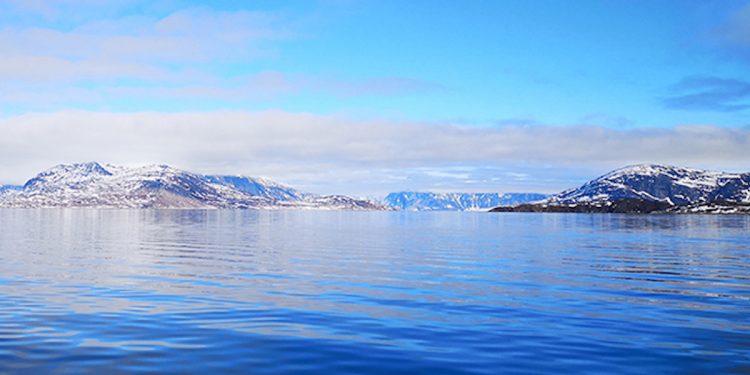 A new study shows that concentrations of microscopic plastic particles in the sea along the west coast of Greenland are roughly the same as in the Atlantic. These minute pieces of plastic, measuring approximately one tenth of a millimetre, are also the same size as phytoplankton, the preferred diet of copepods.

Microplastics (MPs) in this size bracket were found by researchers from DTU Aqua, DTU Environment, Aalborg University, and the Greenland Institute of Natural Resources in samples from Nuup Kangerlua (or Godthåbsfjorden), which runs past Nuuk and into the sea west of Greenland.

They found about one particle per 10 litres of water, which is similar to the concentrations previously found in seawater elsewhere in the North Atlantic. The researchers had expected to find much higher concentrations because German researchers have measured very high concentrations of MPs in snow and ice on the glaciers melting into Nuup Kangerlua. The results of the study have just been published in the scientific journal Environmental Pollution.

‘There’s plastic in the fjord. Not as much as we would have expected based on the concentrations found by the German researchers in snow and ice. But it’s there and the plastic particles are generally very small. They are exactly of a size that the copepods in the area can eat, which means they can enter the marine food webs that way,’ said Professor Torkel Gissel Nielsen at DTU Aqua.

He stressed that the concentrations of plastic currently detected are probably unlikely to have significant adverse effects. But if it gets much worse, we could have a problem.

‘We can also see that there are 10,000 times as many phytoplankton in the water as there are plastic particles. So assuming that the copepods eat whatever they come across and given the abundance of food available to them, they are unlikely to end up ingesting too many plastic particles at all. And so the risk of the MPs entering the marine food webs and being distributed around is infinitely small,’ he said.

The researchers from the VELUX project MarinePlastic collected samples in five places along Nuup Kangerlua. They used specially developed pumps fitted with filters capable of collecting the tiniest MPs, but for comparative reasons they also collected samples using traditional Bongo nets, which were shown to collect a thousand times fewer MPs than the pumps. The nets only caught MPs larger than 300μm.

‘Using pumps like we’ve done in this case, you’ll find far higher concentrations of very small MPs—which is what is most bio-available and potentially able to enter the marine food webs via copepods,’ Torkel Gissel Nielsen said.

Nuuk is a source of plastic

The research vessel sailed from inside the fjord, where the glacier water runs into the fjord, past Nuuk and out to the mouth of the fjord. In five places along the way, samples were collected, and the highest concentration of MPs was seen around Nuuk and further out towards the sea. Nuuk is Greenland’s largest city with approximately 18,000 inhabitants. The city does not have effective sewage treatment plants.

‘We also found that MP concentrations were roughly comparable with concentrations previously found in the North Atlantic, about one particle per 10 litres of water. And Nuuk was identified as a point source. Compared to the measuring stations further into the fjord, MP abundance—and especially the smallest size fractions of MPs—increased close to Nuuk,’ he said.