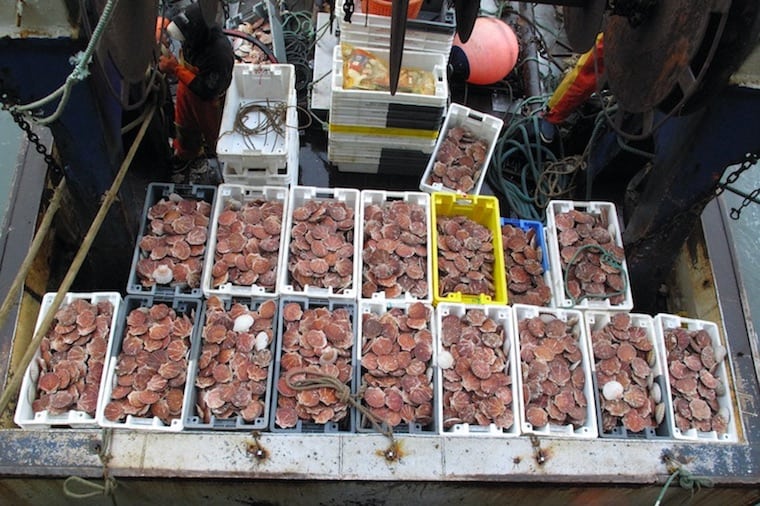 The French scallop fleet’s frustrations over the UK scallopers working grounds that remain closed to them for another month came to a head as scallop boats from ports along the Channel coast sailed to the Seine Bay to head off the UK scallopers.

In some heated exchanges, flares were let off and rocks are reported to have been thrown, with damage to both UK and French fishing vessels during the altercation.

French scallopers are prohibited from fishing until 1st of October and there has been long-standing tension over fishing grounds in the Seine Bay.

35 French boats are reported to have sailed to scallop grounds to confront five UK scallopers.

While the UK scallopers are fishing legally outside the French 12-mile limit, the French scallop fishermen claim that the UK boats are reaping the rewards of France’s responsible management of these grounds.

According to the President of the Normandy Fishermen’s Association (CRPMEM), there have been long negotiations towards including the whole of the UK scallop fleet in agreements.

‘They see a short-term gain and the UK has refused to make progress on this,’ a CRPMEM de Normandie spokesman said, commenting that ten years ago a sighting of a UK scalloper was a rarity, but the effort has been gradually increased over the years.

‘A large part of this fleet is big boats that fish with a ‘scorched earth’ policy, and which can work over a wide area, unlike the smaller vessels.’

The UK scallopers are now reported to have withdrawn to fish outside the 20-mile line, following the altercation with the French scallop fleet.