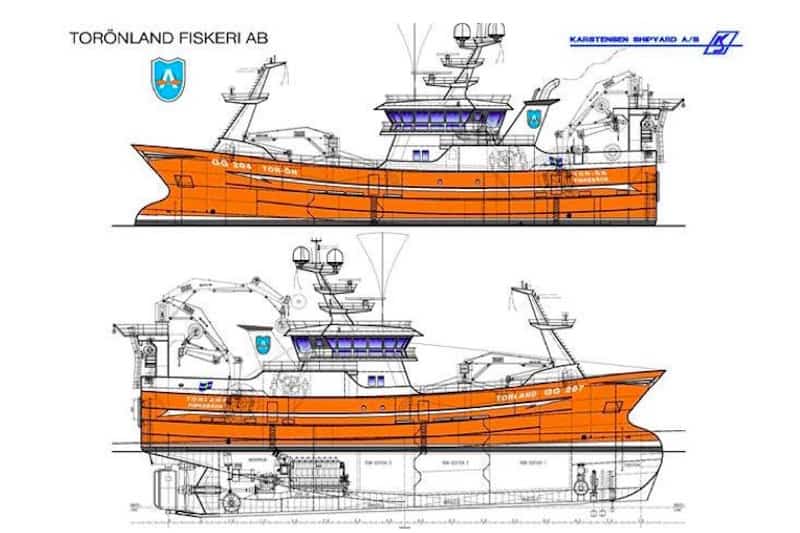 Swedish fishing company Torönland Fiskeri, based at Fiskebäck near Gothenburg, has ordered a pair of 49.90 metre pelagic vessels for delivery in late 2019.

The two trawlers currently run by the Ahlström family, the distinctive orange-hulled Torön and Torland, which were built in 2000, have been sold to a Russian Far East company based in Sakhalin, where they will be used for fishing around the Kuril Islands.

Torön and Torland are expected to leave Skagen this week and to steam via the Suez Canal and Singapore to South Korea.

According to Karstensens Skibsværft, which has the order for the two new replacement pelagic boats, the third generation of the Ahlström family in Fiskebäck has placed the order, while the fourth generation of the family is already active in the business.

The pair will have 2999kW main engines plus a pair of 600kW auxiliaries each, and twin 600kW cooling systems.

The new Torön will be crewed by brothers Svante, Fredrik, Phillip and John, while Torland will be in the hands of brothers Olau, Simon, David and Emanual as they fish for brisling in the Baltic, and sandeel and sprat in the North Sea, with catches landed to FF in Skagen for fishmeal production. Landings of North Sea and Skagerak herring and mackerel are landed to Skagerak Pelagic in Skagen.