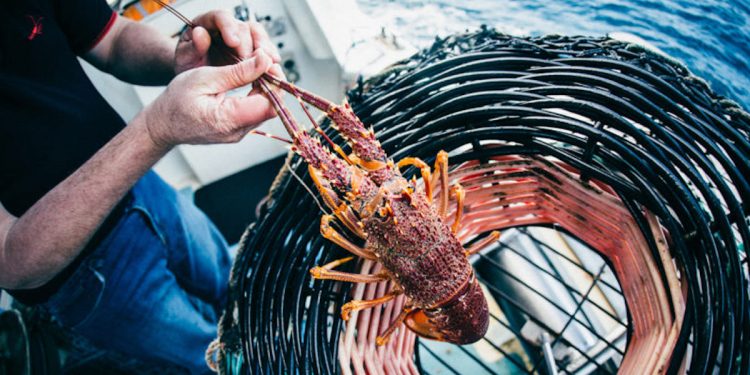 Despite the millions Australians spend on oysters, prawns, lobster and fish every festive season, it’s the export sector that keeps driving the premium end of the seafood industry, particularly in South Australia.

The state’s fishing and aquaculture industry contributes about $750 million to its economy annually and is led by southern bluefin tuna shipments to Japan, rock lobster sales to China and abalone to Hong Kong.

According to the National Fisheries and Aquaculture Industry Contributions Study released in September, southern bluefin tuna was easily the biggest contributor to South Australian seafood exports while rock lobster was the highest priced SA seafood on global markets fetching an average price of $94 per kilogram followed by abalone at $83.

Cracking a crayfish claw is a festive favourite in South Australia during December but the majority of the state’s southern rock lobster is exported to Asia or sold in the eastern states.

Of the 3000 tonnes Australia processes commercially each year, about 53% is caught in South Australia, 37% in Tasmania and 10% in Victoria.

South Australian company Ferguson Australia is a major player, processing and marketing about 450 tonnes of southern rock lobster a year. More than 90% of its catch is exported to China with smaller shipments also regularly sent to Malaysia, Singapore, Hong Kong and Taiwan. The South Australian season opened on 1st October with good early catches and the first live lobsters landing in China with days.

The fishery has received a boost this year with the lifting of the final portion of a 10% tariff on Australian lobsters in China as part of the China-Australia Free Trade Agreement. The CHAFTA agreement also gives exporters direct access to the Chinese market, which has allowed entry into more Chinese cities including Hangzhou, Dalian and Qingdao.

Ferguson Australia Managing Director Andrew Ferguson said establishing supply chain systems in China to allow a free flow of product was still a challenge but had opened this year.

‘Having access to the Chinese market in its raw form is certainly different and has proven challenging logistically in terms of airport clearances and times but it’s definitely good for our business,’ he said.

‘It is opening up for sure and as we find linkages by air we’re getting more access to airspace that we didn’t have before.’

It has been a mixed year for the state’s abalone industry. The SA Abalone Industry Association is celebrating 50 years of supplying the banquet tables of Hong Kong and China with prized green lip abalone and released a book to celebrate the milestone in November.

But it comes at a time when protests and civil unrest are putting a dent in demand in Hong Kong as restaurants struggle to attract customers who are instead opting to stay in the relative safety of their homes.

Australia is the largest wild-caught abalone exporter and produces almost all of the world’s green lip abalone, one of the largest and most sought after species. Green lip is prized in Hong Kong and China for its consistent creamy white colourings, texture and flavour and is regarded by many as the best sustainably caught wild abalone in the world.

South Australia produces about 70% of Australia’s 488 tonnes of wild caught green lip abalone, with many of the largest and most sought after specimens coming from the waters around Streaky Bay and Port Lincoln.

While the abalone industry faces some uncertain times, the state’s oyster industry is looking forward to a long-awaited recovery in 2020 after a three-year program to safeguard itself against Pacific Oyster Mortality Syndrome (POMS).

Latest forecasts predict oyster production in South Australia to grow in the 2019/20 financial year for the first time since 2016/17.

In February 2016 the local oyster industry was affected by a severe supply shortage due to a POMS outbreak in Tasmania, where South Australian growers traditionally sourced 80% of oyster spat.

In line with South Australia’s strict biosecurity laws, there was a ban on South Australian growers importing Pacific Oyster spat in a bid to stop the disease spreading to the state’s growing regions on the Eyre and Yorke peninsulas and Kangaroo Island.

The only two existing small spat producers in the state ramped up their production and PIRSA’s research division SARDI also produced more than 100 million spat for the industry in 2017 and 2018.

These included the development of POMS resistant strains, which are expected to help keep South Australia POMS free in the future.

A BDO EconSearch report for the South Australian Government this year found that the farm gate value of the state’s oyster industry halved from about $40 million in 2016/17 to $20 million last year despite a 20% increase in prices.

South Australian Oyster Growers Association Executive Officer Trudy McGowan said although growers were doing it tough, there was ‘light at the end of the tunnel.’

‘I think people are quietly confident because they’ve got oysters back in the water and they are watching them grow,’ she said.

‘Having the hatcheries in South Australia now and the fact that we’re the only POMS free state means our guys can not only supply South Australia but can also export to the other areas and that gives us a real opportunity going forward to be the oyster growing capital of Australia.’

Port Lincoln is the home of Australia’s largest commercial fishing fleet and the $120 million-a-year southern bluefin tuna industry, the bulk of which is exported to Japan. The pristine waters of Spencer Gulf also support the premium prawn and kingfish industries.

Clean Seas Seafood is the largest farmed kingfish producer outside of Japan, and the global leader in full cycle breeding and farming with sites in Boston, Arno and Fitzgerald Bays. It claims its Spencer Gulf Hiramasa kingfish is ‘arguably the best raw fish in the world.’

It also plans to use its new liquid nitrogen freezing technology to drive sales growth in the huge North American and Asian markets, which have traditionally been dominated by frozen Japanese kingfish.

Clean Seas recorded a $2.59 million profit for the 2018/19 year and also announced in July it had formally received certification by the Aquaculture Stewardship Council (ASC), which is considered the gold standard in aquaculture globally.

The certification, profit and growth vision mark the end of a turbulent decade for the company.
In 2009, Clean Seas had a live biomass inventory of about 4000 tonnes of kingfish before the fish started mysteriously dying. By 2012 the mortality rate had increased from around 15% to more than 80%, reducing its live fish inventory to less than 500 tonnes.  In mid-2012 the company discovered a taurine deficiency in the feed was responsible for the soaring death rate, which is the subject of an ongoing court case.

In 2017 Clean Seas moved its processing to a new facility in Adelaide to be closer to export markets and increase production capacity.

‘The Company reiterates its confidence and positive outlook that it is on the right trajectory to achieve the scale required to deliver on its goals of profitability, cash flow sustainability and gains in shareholder value.’