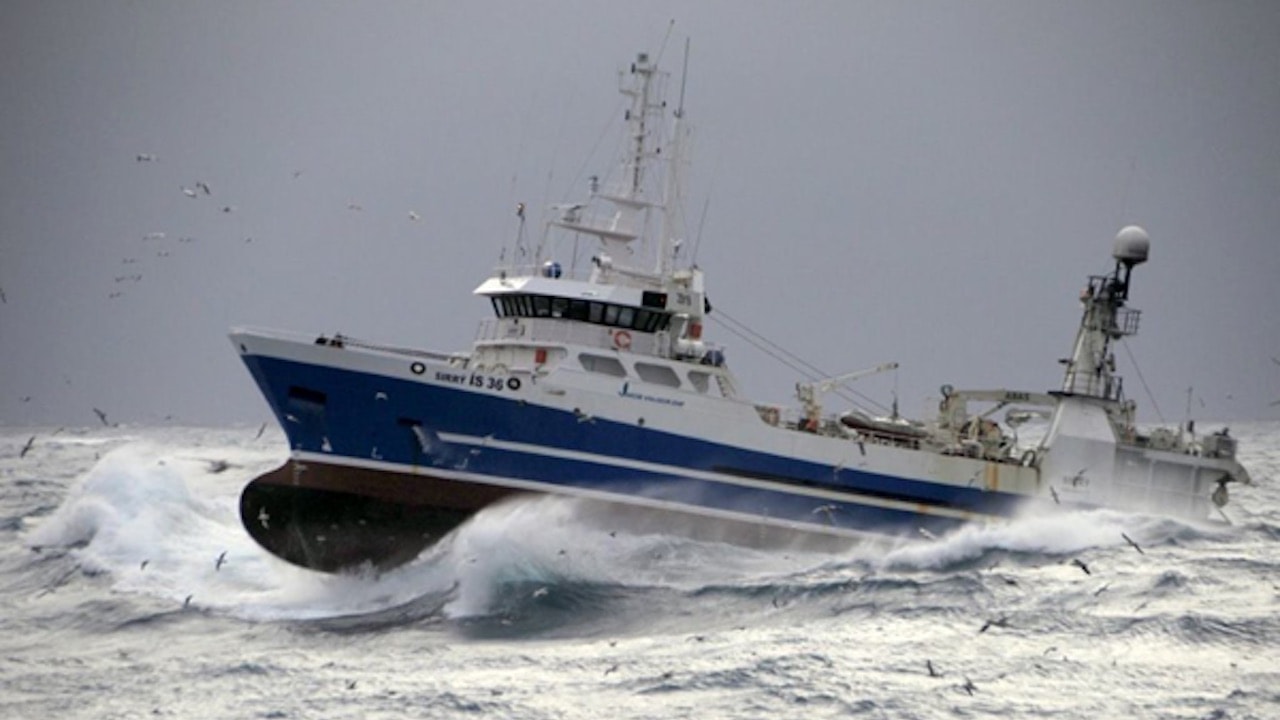 Icelandic trawler Sirrý has switched from a single codend to a high-tech pair of bags with innovative rigging – which has immediately paid dividends in terms of quality and ease of handling.

‘We have been using  this split codend from Hampiðjan since the spring and it has worked extremely well for us. The fish are alive and kicking as they drop down into the pounds where they are bled immediately. The catch quality has increased significantly and production ashore tell us that there’s no difference in quality between our fish and what the longliners are landing,’ said Sirrý’s skipper Höskuldur Bragason.
Sirrý is fishing with a four-panel split codend rigged on Hampiðjan DynIce Quicklines with its standard Gulltoppur trawl supplied by Snorri Sigurhjartarson’s team at Hampiðjan in Ísafjörður.
Sirrý’s split codend is made in 6.2mm yellow Magnet netting in a 155mm mesh size. The twin bags of the codend are nine metres long, and according to Höskuldur Bragason, they are great to work with.

‘We were using a single bag before, and it goes without saying that by using a split codend we’re putting less pressure on the fish. Rigging it to Quicklines ensures that the tensions on the codend are much more evenly spread when the gear is hauled and the meshes stay open more effectively than we are used to seeing with a conventional two-panel split codend,’ he said, adding that with a mesh count of around half that of a standard codend, the selectivity is improved even further.
‘We see this in that redfish that we otherwise get as a by-catch, is selected out much more effectively. The meshes in the split codend are fully open, so there is much less risk of cod being damaged by redfish spines.’
Höskuldur Bragason said that in his experience, what is damaging for fish quality, especially in heavy weather, is when strops are slung around the codend when hauling the gear. Quicklines solve this problem, as loops made from the same material are rigged to the Quicklines and these are used to haul the codend on board. This reduces the risk of accidents on deck, as the crew only need to clip a gilson onto the loops, and hardly need set foot in the trawl lane.
‘We can almost say that codend sounders are making codend sensors obsolete. I can see exactly how much fish there is is passing down to the codends. We try to manage hauls around facilities we have on board, There´s space for seven tonnes of fish in the bleeding tank, and we take care to keep within set limits,’ he said, commenting that clearing the split codend is quicker and easier than with a standard codend.
Höskuldur Bragason stressed that it’s important to have access to fishing gear technologists who are familiar with conditions in the Westfjords.
‘Snorri is one of a kind. We can always talk to him and the other Hampiðjan staff in Ísafjörður, and they sort things out for us.They could hardly be more helpful, and we take every opportunity when we’re ashore to talk things over with Snorri and his team,’ he said.

T90 Hemmer trawl scores all round for veteran factory trawler