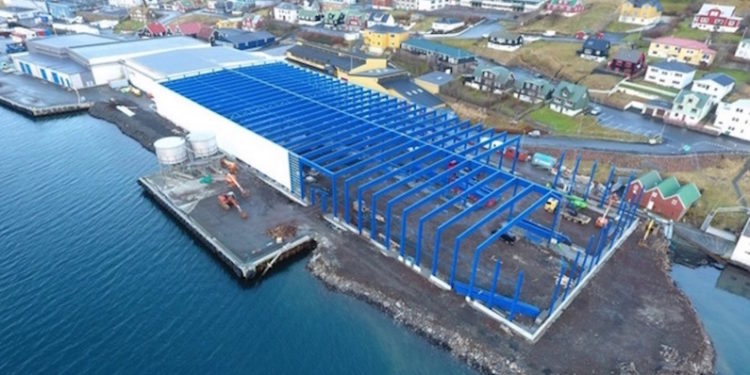 What promises to be the largest and most highly automated pelagic processing factory anywhere in the world is taking shape in the Faroe Islands, and for supplier Skaginn 3X this represents the company’s largest single contract – and possibly the largest for any Icelandic equipment supplier.

The Varðin Pelagic factory at Suðuroy in the Faroe Islands was built by Skainn 3X and commissioned in 2012, after which it operated with great success until a serious fire left the building gutted in June 2017. It wasn’t long before Varðin and Skaginn 3X had reached an agreement for new factory to be built and the site was quickly cleared for construction to begin.

Vardin Pelagic made a detailed comparison with other solutions in the market before making its choice.

‘It was our duty to look carefully into all options available and also listen to our customers,’ said Varðin Pelagic’s CEO Bogi Jacobsen. ‘The technology offered by Skaginn 3X was clearly the best option for us.’

The new factory is already under construction and will be the most sophisticated of its kind in the world when complete, with a an initial capacity for 1300 tonnes of frozen production per day, with expansion opportunities up to 1700 tonnes per day.

According to Skaginn 3X CEO Ingólfur Árnason, the unique freezing technology the company has available makes the high level of automation possible and this is the largest seafood industry technology contract ever for an Icelandic company.

‘This is the largest contract that Skaginn 3X has signed and, as far as I know, the largest seafood contract signed with an Icelandic technology company,’ he said.

‘It’s a valuable acknowledgment of the great team at Skaginn 3X that Varðin Pelagic has chosen us for a second time and proves that our system is both innovative and reliable.’

Ingólfur Árnason said that the new Varðin Pelagic plant is a revolutionary complete solution for the pelagic industry with strong focus on environment, efficiency and product quality.

‘Various processing and packing possibilities are important for utilising ocean recourses and to meet the market’s strict requirements,’ he said.