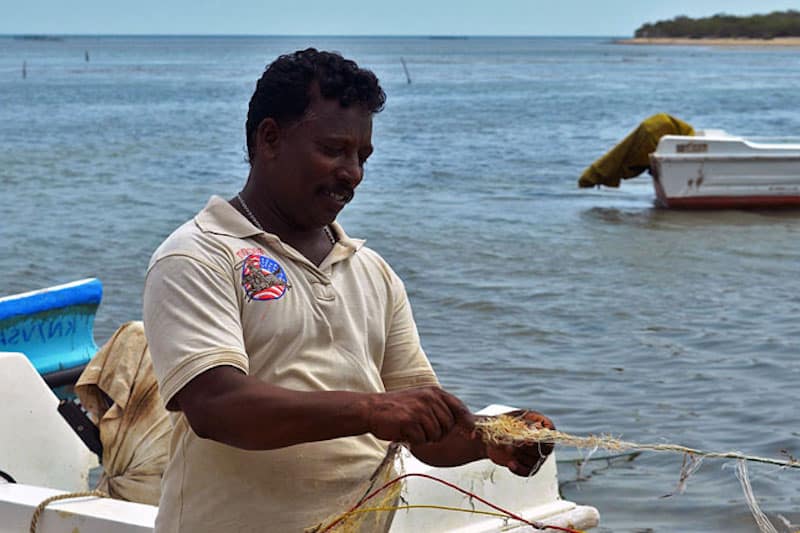 The International Labour Organisation’s project helps free fishermen from debt bondage and supports livelihoods. Fisherman Kristin Weyanathabaln has another demanding day ahead, as he sets out fishing off the coast of northern Sri Lanka.

He smiled as he recounted how he has managed to free himself from the shackles of bonded labour.

Kristin Weyanathabaln had only started fishing in 2010, one year after the end of Sri Lanka’s civil war that lasted nearly 26 years and claimed countless lives and livelihoods. He had high hopes but no money, and had to borrow 100,000 rupees ($650) from a money lender to buy a fishing net- at an astonishing 300% interest rate.

Like many other fishermen in Kilinochchi district, he quickly fell into the trap of debt bondage.

He was forced to sell all his catch to the same moneylender as a form of repayment, and with fishing being seasonal he had to borrow further from the moneylender during off-season to make ends meet.

‘I had to agree to the price he set. I know it was lower than market price but I didn’t have a choice,’ he said.

He barely made enough money to care for his wife and five children.

His life changed after the International Labour Organization (ILO), which was actively engaged in post-war rehabilitation, intervened through the Local Empowerment through Economic Development (LEED) project.

The project provided financing and other support to fisheries co-operatives that now help fishermen pay back their loans, open bank accounts and manage household finances. The co-operatives also buy and market members’ catch. With the middleman cut out, fishermen are now getting almost twice as much as they used to for their catch. Each fisherman has to place a portion of the income into a bank savings account, while some of the money is reinvested to fund community activities.

‘I have my own boat,’ he said. ‘I purchased it from the income that I earned through the fishing. I also started to save which I have never done before.’

The project has also provided training and mentoring to the Poonakary Fishermen Co-operative Societies’ Union (FCSU) in Kilinochchi district, which has now become a training provider and provides mentoring services to co-operatives in other districts.

The FCSU represents some 2000 fishermen organised in 14 co-operatives.

Launched in 2011 with the support from the Australian Government, LEED aims to help rebuild livelihoods that were shattered by the civil war.