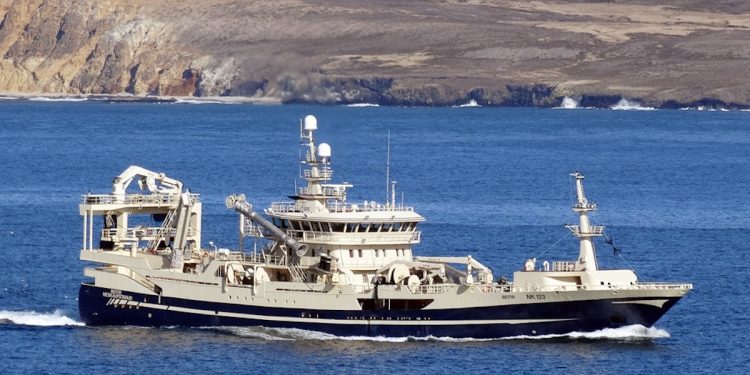 With both mackerel and Atlanto-Scandian herring seasons over, Síldarvinnslan’s pelagic vessel Beitir is now on the lookout for Icelandic summer-spawning herring.

This year Síldarvinnslan’s fleet has quotas for 4000 tonnes of Icelandic summer-spawning herring. Beitir is currently west of Iceland and skipper Tómas Kárason said that so far there is not much to be seen.

‘We heard yesterday that there were good marks to be seen in the Jökull Deeps and Margrét shot on it. That turned out to be 140 tonnes, and now we need to check on the herring with reference to the parasites that the herring stock has suffered from in recent years,’ he said.

‘When we started fishing mackerel this year they had already shifted eastwards and we didn’t have many trips in home waters,’ said Börkur’s skipper Hjörvar Hjálmarsson.

‘In general fishing was good, and the fish were large and suitable for production. Then the mackerel migrated out of the Herring Loophole and into Norwegian waters, and that brought fishing to an end for us. Most of our herring was caught not far off the east of Iceland. There was a lot of herring and tows had to be kept short. Then the herring shifted eastwards to the Herring Loophole and we followed them until the end of the season.

‘Next we’re producing the annual Christmas herring and then we’ll take a look at the Icelandic summer-spawning herring when they start fishing, and we’ll see if it’s fit for human consumption. But the big question is, will there be a capelin season?’