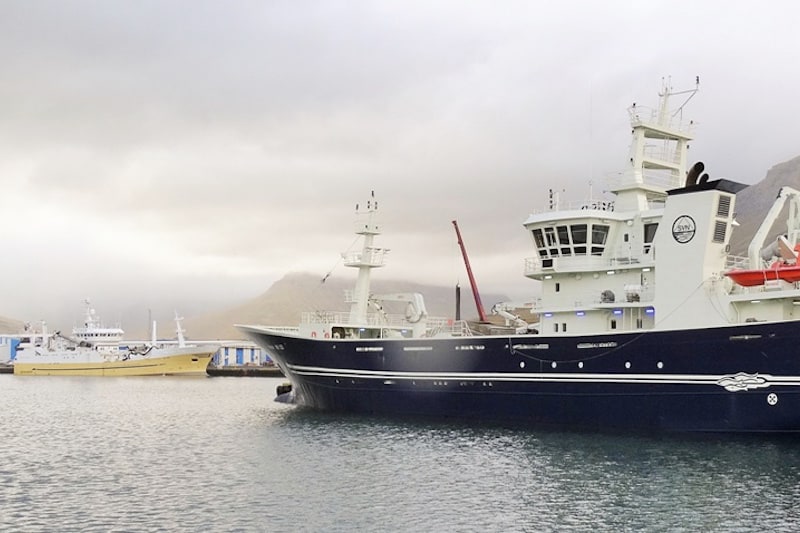 Síldarvinnslan’s fleet has finished its mackerel fishery this year, ending the season with two of the pelagic vessels trying to catch mackerel with purse seine gear in the Herring Loophole.

Although there was some initial success when Börkur landed 630 tonne of purse-seine caught mackerel, subsequent attempts haven’t gone as well. Both Börkur and Bjarni Ólafsson have now switched to herring. Börkur has made a first landing of 740 tonnes and Bjarni Ólafsson is at sea.

‘We searched for three days for something worth shooting on but there wasn’t much to be seen,’ commented Börkur’s skipper Hjörvar Hjálmarsson on the final days of the mackerel season.

‘We shot three times. Two of those shots were empty and there was 40 tonnes on one. Then the weather started to worsen so we switched to herring which we take in our trawl gear. We had our herring in three tows over twelve hours,’ he said, commenting that there is still mackerel in the area, but very difficult to catch in a purse seine.

‘There were some boats doing well with their trawl gear yesterday before the weather worsened. When we reached the Herring Loophole there were Norwegian pelagic boats fishing herring in purse seine gear in the Norwegian zone, and then they also lost the fish. It looks to be the time of year when it’s hard to find mackerel that can be caught in a purse seine, as well as which the fish is difficult to handle – they’re moving fast.’

Runólfur Runólfsson on Bjarni Ólafsson said the same, commenting that they should probably have started trying to purse seine for mackerel earlier in the year.

‘There’s nothing to be had in the purse seine out there on the Herring Loophole now. We had three empty shots. The fish isn’t in dense shoals at this time of year, and they are also all over the place. It’s also harder to manage the purse gear when we’re into autumn and the weather’s worse. We decided to switch to herring and we’re fishing in the Norðfjörður Deep,’ he said.

Working together on small pelagics research

Heading for Greenland with new Gloria XW and Bluestream doors