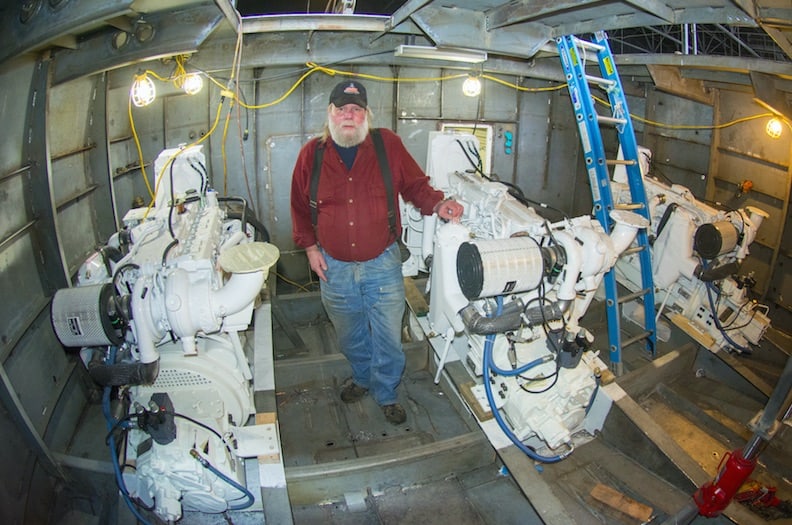 When R. Bodey was looking for a new salmon tender for the Yukon River, he had a set of plans drawn up by Tullio Celano based on a boat he had owned some years before, and then took the plans to WCT Marine’s shipyard at Tongue Point on the Columbia River near Astoria, Oregon.

‘If it works well, then why change it?’ might have been the thinking behind the layout of the new boat now taking shape at Astoria, with the steel hull and aluminium superstructure already completed.

The boat is designed to serve as a tender for salmon on the Yukon River. All fish will be transported in totes on the 27-foot main deck and loaded using a hydraulic knuckle boom mounted just aft of the raised forepeak. The design of the deck space is such that it can also transport two 20-foot containers or other general cargo to the villages along the river.

An aluminium deckhouse, with galley and single bunk is mounted aft. A middle deck provides one more bunk space. Above that the wheelhouse provides a 21-foot 3-inch eye level view. A pair of push-knees is mounted forward.

As of November this year, the project was far enough along to drop in the engines onto their beds. The 57 X 21-foot steel hull has 6-foot hull depth with a 3-foot ten-inch operating draft.

Draft is the all-important factor in working the rivers of western Alaska where dredging if virtually non-existent and winter ice with spring freshets can annually carve entirely new channels. To assure maximum cargo capacity with minimal draft the three 34 by 34-inch props are set up with one third of their diameter in tunnels.

The props are mounted on 2.5-inch shafts. Propulsion power is provided by three Cummins QSL9 engines each of which delivers 335hp at 1800rpm to Twin Disc gearboxes with 2.93:1 ratios. With this heavy duty rating, the nine-litre engines are classed IMO 2, EU3a, and EPA tier 3. The starboard engine is fitted with a hydraulic power take-off to power the deck crane and anchor winch.

Delivery of the finished vessel is expected for the spring of 2017, after which it will travel north under its own power.