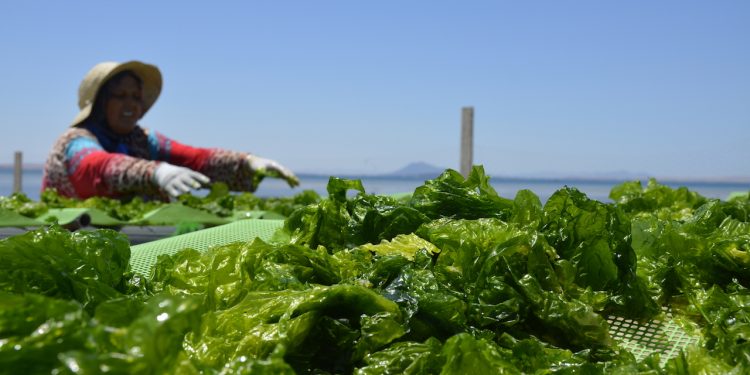 Seaweed could add up to 10% to the world’s food supply by using just 0.03% of the surface of the oceans, as well as having the potential by 2050 to absorb 135 million tonnes of CO2 annually, in addition to 30% of all the nitrogen entering the oceans from land-based pollution.

‘Seaweed may well be the greatest untapped resource on the planet,’ said Vincent Doumeizel, Senior Advisor to the United Nations Global Compact and promoter of the Safe Seaweed Coalition.

‘This nascent industry is currently highly disconnected and lacking global safety standards to scale up. By working together, we can leverage seaweed production to address some of the most pressing global challenges.’

Oceans cover more than 70% of the Earth’s surface, yet they only contribute to 2% of the world’s food. Seaweed could contribute to a systemic change in our model of civilisation but this vast potential remains majorly untapped.

Seaweed could well become a precious ally to meet the global challenges, from hunger to climate change. Its uses range from a nutritious source of food for human consumption, to animal feed, fuel, fertiliser, a substitute for plastics and even medicine. Importantly, seaweed can also play a role in carbon sequestration and eutrophication mitigation, and it is increasingly being used as a “nature-based solution” to mitigate climate change and support ecosystems.

While seaweed is the world’s fastest growing food production sector, in the Mediterranean it is still at a very early stage.

In 2015, Morocco was among the first countries in the region to invest in seaweed farming. A co-operative of artisanal fishing people wished to diversify their income and find new sources of growth for their activity. Their cumulative production to date amounts to more than 600 tonnes of Gracilaria gracilis, a red algae that is transformed into agar-agar, a product of significant commercial importance at the international level.

Another example of the business potential of seaweed farming can be found in Tunisia, where a farm in the Bizerte lagoon has expanded in Mozambique and Zanzibar to export more than 100 algae products in 17 countries, while offering employment to local societies and providing livelihoods for coastal communities. The majority of those currently employed by the seaweed industry across Africa and Asia are women.

This year, the General Fisheries Commission for the Mediterranean (GFCM) of the Food and Agriculture Organization of the United Nations (FAO) has started mapping all seaweed stakeholders in order to bring them together to exchange knowledge, develop best practices and promote seaweed farming in the Mediterranean and the Black Sea.

‘The promotion of seaweed farming in the Mediterranean and the Black Sea is a key goal for the GFCM, in its efforts to transform the aquaculture industry through innovative and nature-based solutions,’ said Houssam Hamza, GFCM Aquaculture Officer.

‘By working with all stakeholders, we can develop a resilient and sustainable sector that provides food security and livelihoods in our region.’