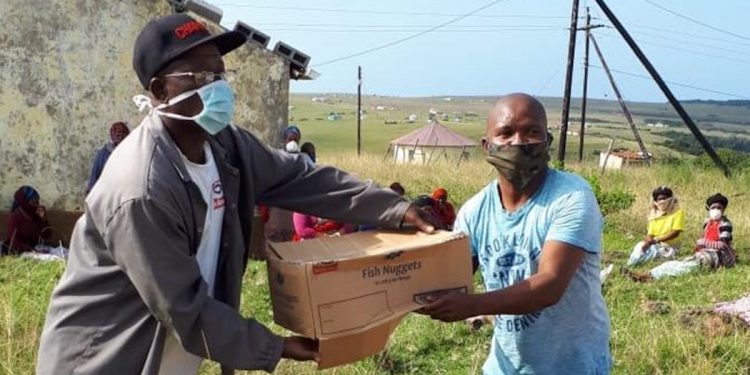 This is where a group of Sea Harvest staff have been frantically packing 65,827kg of sealed non-perishable food products into 10,000 boxes since the start of the lockdown in South Africa.

The food donations are being made by the not-for-profit Sea Harvest Foundation. While it initially benefitted no-income households on the Cape west coast, the list of beneficiaries was later extended to include small-scale fisher folk and low-income households in the Eastern and Northern Cape that have struggled to put food on the table.

‘Sea Harvest is committed to giving back to local communities that are key to the success of our business because of their goodwill and the people who come from these communities who form the backbone of our company,’ said Sea Harvest Foundation chairperson Terence Brown.

‘The Foundation, as an NPC, has a Board of Directors that considers how best we can positively impact local communities with the available funds. With the increasingly devastating effects of the lockdown on individual households and our economy, the Board unanimously agreed to refocus its efforts to assist in the fight against hunger that may plague families in this time.’

The Foundation has not been alone in ensuring that the food parcels reach the intended beneficiaries – it has partnered with the Department of Environment, Forestry and Fisheries (DEFF); Saldanha Bay Disaster Relief Centre; Saldanha Bay Municipality; Fish SA; the South African Fisheries Development Fund; as well as local NGO’s to achieve this key outcome.

Terence Brown said that besides the food parcels, the Foundation is also donating fish mince to feeding kitchens on the Cape west coast and, in April, handed over 10,000 surgical masks to medical staff at a hospital in Vredenburg.

The Foundation will, meanwhile, continuing with its planned flagship projects for 2020, which includes the Sea Harvest bursary programme for tertiary students.